You know, not to get too meta about my own shtick, but sometimes I get into so much of a groove exaggerating a strip’s tropes for humorous/queasy-making purposes that I forget that those tropes don’t always even need exaggeration! For instance: did you know that much of the intended humor value in Barney Google and SnuffY Smith derives from the fact that all the characters are desperately poor? It’s true! Like, I don’t think I ever fully grasped it, but instead of having “rooms” in their shack, the Smiths just have a tattered curtain running across the middle of the interior, providing rudimentary privacy when Snuffy and Loweezy want to get away from each other — when the latter’s resentment towards the former for never, ever helping around the house reaches a seething crescendo, say.

So Rusty is holding some kind of taxidermied monkey’s paw on the end of a long stick, right? There’s no way that withered hand at the bottom of panel two is (a) connected to his shoulder by an ordinary arm or (b) is a human hand or (c) is living tissue with blood pumping through it. What a strange, upsetting little boy. Mark at least seems to understand that Rusty is best experienced in small doses, though his attempt to express the idea using normal human syntax is somewhat unsuccessful. “Consider that a deal, friend! And remember, we can’t visit you if we don’t go home first! So we’re going home! Trust me, once you stop looking at Rusty, that weird inexplicable tension you have in your jaw will go away!”

Fine, Uncle Lumpy, fine, you’ve got me hooked on Edge City’s obsessive neurotic stylings! Anyway, today obsessive neurotic Abby Ardin’s hopes for a little emotional intimacy with her husband have been dashed, even taking into account the extremely low bar she’s set for herself.

After a busy day of not giving Tom’s lovelorn messages to her daughter, Elinor relaxes by reading the Complete Works of Edgar Allan Poe and rattling her beloved bottles of prescription meds. This raises the question: How will Tom die? Tied to a table and eviscerated by a huge swinging blade? Or from a mysterious pill overdose? 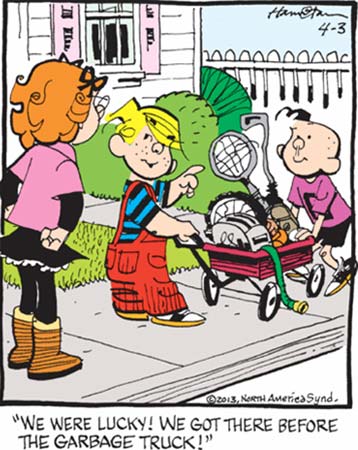 Dennis and Joey are dragging a wagon of garbage around the neighborhood! Yes, Margaret, you are right to be horrified.