So the Gil Thorp baseball season plot so far has been “Foley is annoying and also wants to be a lawyer like his dad,” which, booorrr-ing. But it’s always good to see Marty Moon back in the wooden packing crate that he huddles inside to call Milford games with his trademark thermos full of hooch. Did he have a laptop in there with him before? Does he have a laptop in there with him now? Is that “laptop” just one of those fake cardboard laptops they have to take up space on desks in furniture stores?

Haha, now we see why April didn’t want to invite Randy’s parents to their wedding: because the ceremony will take place behind the barbed wire surrounding the compound of her father’s apocalyptic death cult, deep in the Yucatan rain forest. And it won’t be so much a “wedding ceremony” as an “invocation to the Lords of the Dead, inviting them to drink the steaming blood of the mewling human sacrifice once known as ‘Randy.'” 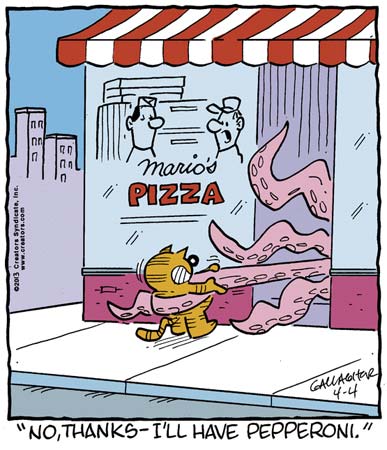 Meanwhile, Heathcliff is single-handedly battling one of the tentacled Dread Elder Gods on behalf of those of us residing on this plane of existence, and, in unrelated news, some guy just wants pepperoni on his pizza.

“Yeah, it helps familiarize the public with businesses and nonprofits they might be interested in … ‘publicizes’ them, you might say. If only we knew someone who was up on that sort of thing!”

Ha ha, yes, “The Hobbit,” that sure was a pop cultural phenomenon that saw a spike in interest several months ago! Anyway, not gonna lie to you guys, it took me a while to figure out that the Wiz was pointing at this dude’s feet.