Update — Well, we ran out of JP and RMMD magnets mid-afternoon EDT on Tuesday, May 14. Thank you generous (and fast!) readers! Contributors at the $15 level will now receive a favorite Josh panel from the last few months, matted for framing and signed by Josh, or at their option a Margo bracelet. Thanks again!

Hey, it’s the Comics Curmudgeon Spring 2013 Fundraiser! It’s your hard-earned money — squander it here, and receive a one-of-a-kind Judge Parker or Rex Morgan, M.D. refrigerator magnet for contributions of $15 or more. Thank you!

“You don’t understand, Margo: I don’t want to be transported to the frontiers of ecstasy in the masterful hands of some handsome Italian Lothario — I want to have FUN. With my MOM.”

Meanwhile, Lu Ann sees herself in a mirror!

Ah, but some daughters know what fun is, and a mother’s role in it. As Sonya speaks, Marylou Hobbs imagines herself tanned and radiant in half of her revealing new swimsuit, striding confidently toward her lover across the deck of his yacht lying at anchor in azure waters gleaming under a benevolent Mediterranean sun — her mother nowhere aboard, in mind, or accessible even in the deepest reaches of her memory.

Sonya’s bullying logic shocks her from her reverie, and she struggles to respond: 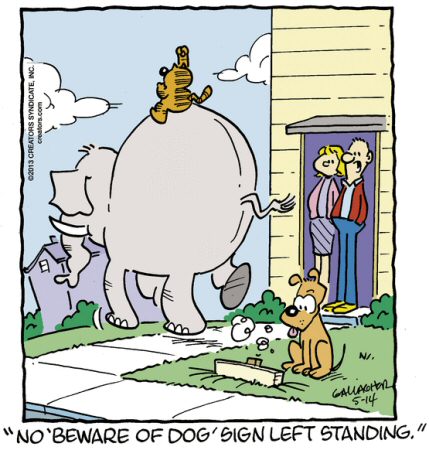 Heathcliff’s campaign to bend mice to his will is well documented, but only now does its purpose become clear. The mice are but pawns in his scheme to scare the neighborhood elephant into wreaking Heathcliff’s terrible vengeance upon the hated dogs. Who will be next? Are we humans safe? I don’t think we’re safe.

Gil Thorp spices up its spring baseball story with a little constitutional law. You know, to make it interesting.