Update: Out of Margo bracelets as of 5/15/13 early morning. Thanks again, generous readers!

It’s the Comics Curmudgeon Spring 2013 Fundraiser! Contribute $15 or more to receive a copy of one of Josh’s favorite recent comic-strip panels, signed, matted, and suitable for framing. Thank you, generous readers!

Action a-plenty in the midweek comics — let’s dive right in!

Ho ho, quite the little geopolitical economist our Sophie, eh? Here the economy of Niger is portrayed as a giant Ponzi scheme, substituting modern easy-to-trade firearms for old-timey low-liquidity postal reply coupons. Next step is to formalize it as a multi-level marketing enterprise, recruiting unclaimed hostages as kidnappers to build the downline and create a never-ending upward spiral of guns, hostages, and ransom money. Then fire up the sales team by giving everybody a logo t-shirt with the slogan: “Guns go ‘POW’ — ask me how!”

Hey Spider-Man! Take a tip from lawyer Matt Murdoch on the first rule of questioning a witness: “Don’t ask a question if you won’t like the answer.”

Pluggers, Jr. meets The Daily Jumble. As a plugger himself, dog-man is merely alarmed by his neighbors’ atrocious table manners. Out-of-town visitor parrot-man, on the other hand, is downright disgusted. Guy looks like he’s ready to KORF his ROPTAR all AELTP the RNCO — and that NIKAPN ain’t gonna help much. 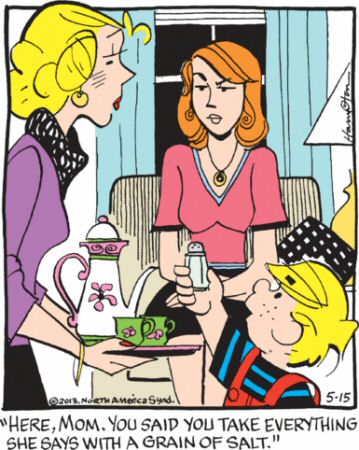 OK, is it me, is it cartoonists, or is the Bad Girl really always the hottest in the room? And we’re talking about a room shared with Alice Mitchell, so SRSLY! Dennis, cut the crap and pay some attention here — you won’t be 5 forever.

Oh, ha ha — I forgot. You will be 5 forever. Kindly resume the crap.

Payback time at the Morgans’. I hope Sarah has more success with her little project than June had with Rex.