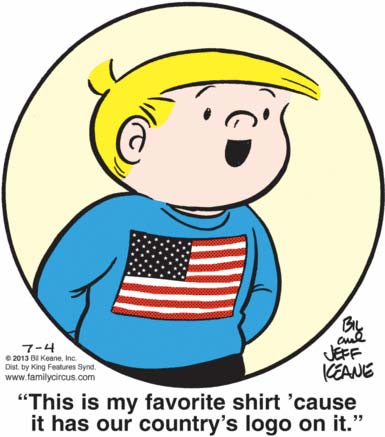 Happy Birthday, America! Here is one of your most beloved comics characters with a terrible gift: the knowledge that Romantic-era views of national patriotism are fundamentally incompatible with advanced 21st century capitalism. Your sacred flag is just another corporate brand to today’s media-raised children!

Oops, sorry, that got a little dark. Let’s focus on your real birthday present: Mary Worth is going on vacation, to some lovely Tucson spa resort! I am so excited for her adventures that I can’t even stand it. What fitness and spirituality class will she take — Zen aerobics or shamanistic spinning? Will she enjoy a pool party besides a non-Charterstone pool? Will Dr. Jeff expect to come with her, and then be gently rebuffed, and then sulk passive-aggressively? Will there be a person or persons at this resort who will have a problem that can be solved by application of Mary’s sensible advice? Will Mary be bitten by a rattlesnake while she hikes through the Sonoran desert? Will that rattlesnake wither and die?

Aww, isn’t that sweet! Peter Parker overheard this little brat demanding a private jet, just like his heroes the Avengers, so he decided to change into his spider-duds to show that some superheroes are losers who have to fly coach just like him! Remember the last time he did something to coax a kid into doing something that normal people do all the time? Remember how that worked out for him? Not that I think this is part of a nefarious villain’s scheme or anything, but I am looking forward to the part where Spidey actually gets to the front of the security line, which I imagine will go something like this:

SPIDER-MAN: [Looks down at ticket and ID, both of which have “PETER PARKER” printed on them prominently]

SPIDER-MAN: [Runs away in a panic]

So Marvin has been doing this thing this week where Marvin and a bunch of other babies are at some kind of sleepaway camp for babies, and I’ve been trying not to let my soul-searing hatred for Marvin draw me into a boring, pedantic “This isn’t realistic” riff, seeing as how it also isn’t realistic for a baby to think in complete sentences or shit his pants for explicitly spiteful reasons. Still, it’s hard to ignore today’s punchline. Taking toddlers hiking is a bad idea, what with their inability to walk more than a few steps without falling down, talk, pay sustained attention to anything, or follow complex directions. Probably instead of thought-ballooning stereotypical hike complaints, Marvin and his fellow toddlers should all be on the ground, crawling in random directions, and crying.

Oh hey this “The Governor of New York is having someone give Lu Ann a makeover” plot is still happening, apparently! As usual, Lu Ann’s panicked semi-comprehending reactions to things are priceless. I’m assuming in the final panel she’s worried that the governor will end up with naughty pictures of her in a state of undress and this will be a political scandal somehow, but I’m hoping that she thinks the he just ordered her very soul to be digitized and sent over the airwaves via sinister telephone magic.