Oh my goodness, look at Trixie’s facial expressions in this strip. Congrats, Hi and Lois, for not backing away from the full psychological horror of her sudden and entirely incorrect epiphany! “Oh God, those things … at the end of my feet … they’re alive. They’re alive. And they hunger. I’ve got to feed them! Eat, piggies!” She shoves her feet deeper into the moist, yielding paste in Dawg’s dinner bowl. “Eat!” She’s desperate that they find something to eat. Because she knows that if they don’t, they’ll start eating their way up her foot, and won’t stop until she is entirely consumed. 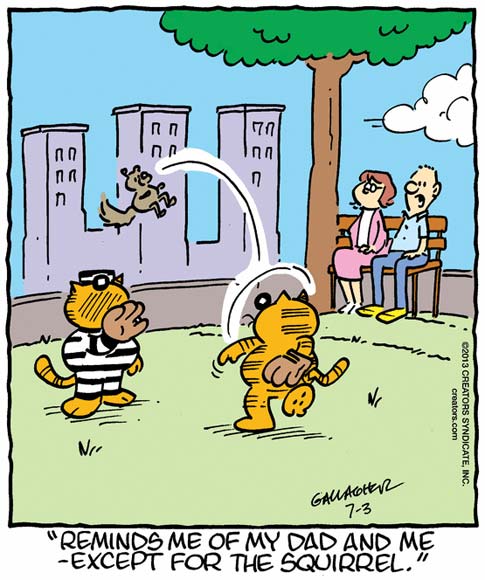 You ever see a cat playing with a toy — batting it around with her paws, swatting it up into the air, maybe holding onto it with her mouth while kicking at it with her feet — and suddenly realize that you’re watching what it looks like when a predator methodically batters its prey to death? Heathcliff and his dad are tossing a dead squirrel around, is what I’m saying.

There is of course a long comedic history of slapstick violence being meted out to characters, and of anthropomorphic animals mixing the experiences of sentient beings and their real-world counterparts. How can you tell that you’ve pushed these tropes too far to be really successful? When you end up drawing a mangled corpse lying in a pool of human-looking blood and viscera, I would argue.

Welp, I officially don’t understand what’s going on in this Dick Tracy storyline, but at least it’s still dishing out the quotables. “Dr. Sail made me an accessory to fraud! I’ll never get back to the moon!” Ha ha, that’s a tough spot that we can all relate to, amiright?

Speaking of things that are awful: Are you guys aware of FunkyWatch, from the indefatigable Chris Sims? Each month he selects and recaps the most depressing Crankshaft and Funky Winkerbean strips from the past 30 days. It’s always worth your time if you’re a Funkyverse obsessee, but this month was particularly grim, and FunkyWatch correspondingly hilarious. Go forth and read it!