The cruelty of Nature is well documented, but the cruelty of Mark Trail, Man of Nature, retains its power to shock. Blissed-out Rusty nurses his otter and dreams of fishing, but mere days from now he will have neither otter, nor fishing, nor any last shred of hope. Mark just twists the knife, while Andy’s mind is all on dinner. Say — maybe they’ll have fish!

In the grip of his alcoholic hallucinations, General Halftrack misinterprets Lieutenant Fuzz’s invitation to Where the Wild Things Are costume sexplay. Lt. Fuzz takes it as a rebuff and retires to his quarters for another long night of Patton, tears, and self-abuse. 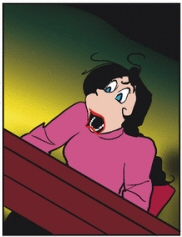 OK, I take back all the terrible things I said about the Not-Ardins’ mouths yesterday.

Heather’s hissy fit reminds Rex what June has in store for him when he gets home. Four months wasted figuring out Milton’s vomiting might be something he ate, and no boat or free meal in it for them anywhere? And now he’s supposed to look into the Alzheimer’s thing, too? These wealthy, entitled jerks! Why, if Milton weren’t his only patient ….

Well OK on the face of it this is one of those “reverse-engineered from the punchline” jokiform utterances we see so often in Shoe, Archie, and Herb and Jamaal. A real-life bird-woman would say, “I surprised my husband in fishnet stockings”, but where are you gonna go with that when you’re on deadline and that tee-time is coming up fast, huh?

But on a deeper level, blondie here is being really unfair — I mean, sometimes a fella just wants to feel pretty, and pantyhose is gross in August and it’s not like I didn’t double-check to see what time you were coming back. Wait — HE! He didn’t check!