In order to put today’s Rex Morgan, M.D., into its full delightful context, we need to backtrack to yesterday’s strip. Heather, the Morgans’ long-ago former nanny who they decided to fire because they wanted to raise their daughter themselves but then she quit before they could fire her so she could start a day school where they’d send Sarah anyway, has now decided to sell that day school so she can monitor her lunatic husband full-time instead: 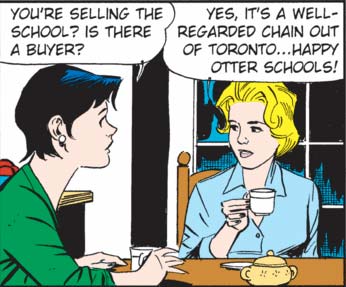 …nice for other children, that is. Lesser children. Sarah is different and shouldn’t have her mind contaminated by some garbage Canadian McPrivateschool chain. Only the very best and most elite schools are good enough for Sarah. Sarah’s non-Morgan classmates, who have also been Heather’s beloved pupils, will not be hearing anything about this “really good” school. The name is probably in some language that poor people don’t even speak!

Oh, look, it’s apparently complaining about double negatives week in the comics! I’ll say this for Hagar: it’s at least true that negative concord was not a feature of Old Norse. (In fact, that may be why it’s absent from Northern English dialects!) So, props for historically accurate linguistic peevery, I suppose.

In other news, Hagar the Horrible is doing the “Hagar tries and fails to cheat on his wife” thing it does every few years or so.

Now we know why Senator Mason is so eager to drill for oil in Lost Forest: his daughter’s boyfriend desperately needs petroleum byproducts to maintain his magnificent pompadour. Our nation’s current strategic reserves simply aren’t adequate for the task.

Welcome to today’s Blondie, where the punchline only offers that element of surprise necessary for humor to those readers who are so senile that they have no idea what month it is. Do these guys know their audience or what?