OH MY GOD EVERYBODY MARY WORTH WAS A DICKENSIAN STREET URCHIN! There was an ultimately quite disappointing Mary Worth flashback storyline in 2008, in which we learn that Mary’s parents got divorced and there was no food in the house but then a neighbor’s family invited her to dinner and taught her about Jesus and later her mom remarried and everything was fine. Except it seems some important backstory was left out in that tale, presumably because Mary couldn’t bring herself to admit her past homelessness to Toby, but since Shelly is perfectly happy to make sexytimes with an ex-hobo, she won’t judge too harshly.

Meanwhile, in Rex Morgan, we’re finally getting to meet the sinister wife who somehow managed to not kill her husband despite shooting him in the head at point-blank range with a nailgun. And she appears to be … an Episcopal priest? Or one of the other denominations that wears a clerical collar and has female clergy? Anyway, bet none of you ever saw that coming, eh? I’m sure the tabloids will have quite a field day with the Tale of the Murderous Ministrix.

I admit to being totally charmed seeing Bung the Jester chatting up a comely (I guess? it’s always tough to tell who’s supposed to be sexy in a strip as crudely drawn as Wizard of Id) rabbit furry in the background of this panel. Partly because they seem to be getting on quite well despite the fact that she’s twice as tall as he is, and partly because, unlike everyone else at this party, Bung has apparently decided that his faux medieval garb is costume enough, thanks. 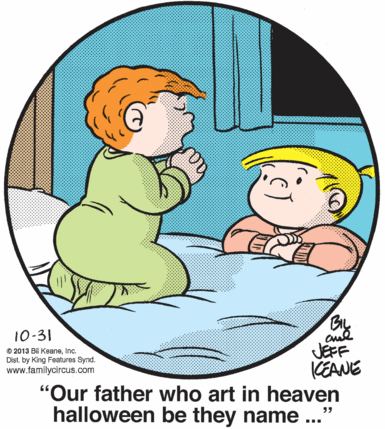 We all know that Billy is an insufferable dick and so his smile can’t represent anything noble or good. The question is: How long a game is he playing here? Is he smug because he’s about to rat Jeffy out to their parents for sullying of the Lord’s Prayer with references to a holiday that celebrates demons and ghouls? Or is he smiling because Jeffy has just accidentally pledged his soul to the Dark Lord Satan, and now Billy won’t have to spend time with him in heaven?

Meanwhile, in Crankshaft, a bunch of drunk little kids are stumbling down the street. Happy Halloween, everybody!