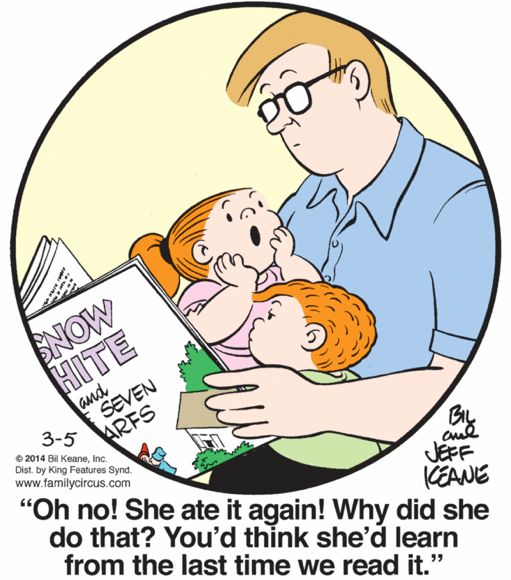 Haha, look at Dolly panic! She’s only beginning to grapple with the plight of the fictional character, who, despite the promise of “Happily Ever After” at the end of their tale, has no existence outside the narrative written for them, and is forced to relive it, ignorant of what awaits them, every time someone picks up the book. “Time is a flat circle,” as Rust Cohle said on True Detective. Dolly’s real fear is not for Snow White, who is barely real for her, but for herself, and that fear is fully justified.

Whoops, looks like we’ve gone from “Tommie has a fiancé” to “Tommie’s fiancé died in a plane crash” in a mere nine weeks! And since Tommie delayed Jim with “love-drowsiness” and caused him to miss his plane in the first place, there’ll be some nice guilt to motivate her character into epic fits of maudlin ennui for months and months! First up: Tommie’s story shifts from “My fiancé is a real human who exists” to “My fiancé died in a plane crash that was definitely not made up boo hoo hoo I’m so sad I can’t possibly do my share of apartment chores for the next several weeks.”

Right you are to “?”, Beetle! This is the focus for the strip today? Isn’t there something even vaguely zany happening anywhere else?

Do you think Hagar had to kill everybody in the waiting room in order to get in to see the doctor? Or did he only murder a few, at which point his intentions were clear and everyone else just fled in terror?

Funky Winkerbean is spending the week focusing on the collapse of a longtime character’s dreams and sense of self. Crankshaft, Funky’s zanier sister strip, is more into physical comedy, like this gag, where the strip’s main character’s bad back is causing him so much physical agony that he’s reduced to crawling on the floor.