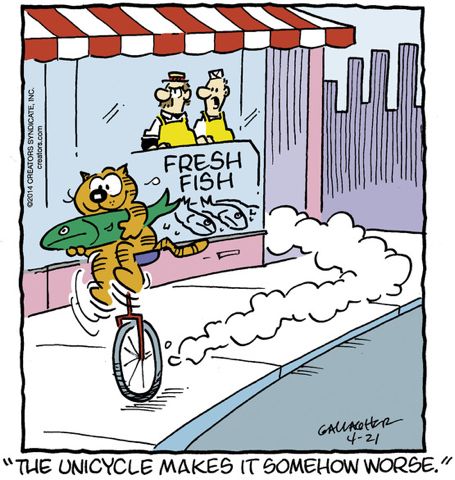 The defining feature of Heathcliff’s universe is unrelenting low-grade surrealism. And the human residents of this world seem pretty inured to it all at this point: whether we’re talking about fish used as sporting equipment or word-helmets or balls of string with faces or the Garbage Ape, it’s just not anything to get worked up about. So I’m glad to see that the fishmongers, at least, are offended by this unicycle-based theft. “Oh come on this … this is absurd. Wouldn’t it have been actually faster and easier for him to grab it and run away on foot? Plus, that unicycle doesn’t even have any pedals! You’re just kicking your paws up and down in mid-air, on nothing! Damn you, Heathcliff, and your unstoppable reign of mild whimsy!”

This Archie strip is clearly a modern-day joke grafted unsuccessfully onto an old one: the corny Archie versions of an iPad and Netflix and Mad Men prove that someone involved is aware of cultural developments of the ’10s, and yet the core gag makes absolutely no sense, unless some people get a secret “Netflix remote” that doesn’t let you actually look up shows by name but does let you scroll through them endlessly at random until you find the one you want. Anyway, when do you think the art from this strip originally ran? I’m thinking Jughead’s inexplicable Yankees shirt places it around 9/11, when the awful attacks on New York meant that we all had to pretend to like their sports teams, for some reason. 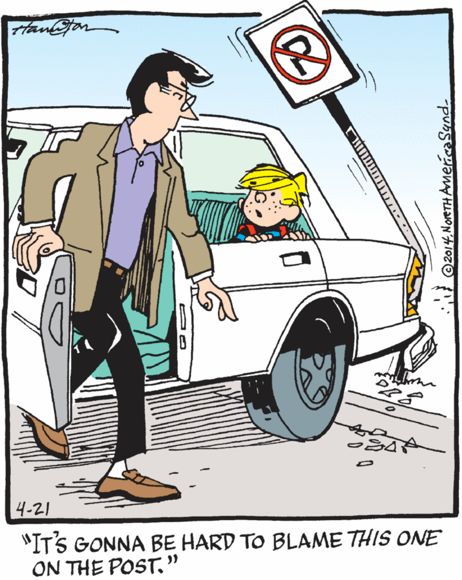 Ever since those hippies Woodward and Bernstein managed to screw over Nixon, Henry Mitchell has managed to blame the Washington Post for just about everything, so don’t doubt that this little fender-bender is also going to turn out to be the liberal media’s fault.