Ten years ago (ten years ago!), Mary unleashed a magnificent act of passive aggression on poor Iris; after smelling Tommy’s weed-smoke drifting through the air vents, she dropped by to say hi to Irish and mention “whatever Tommy was smoking” all snide-like. Now, a decade later, she’s prepared to get semi-confrontational right to Tommy’s face! I’m not sure what I like better, her casual reference to “your history” or the idea that an ex-con will somehow magically have an easier time finding a job if only he reframes the process in his mind as some kind of redemption narrative. 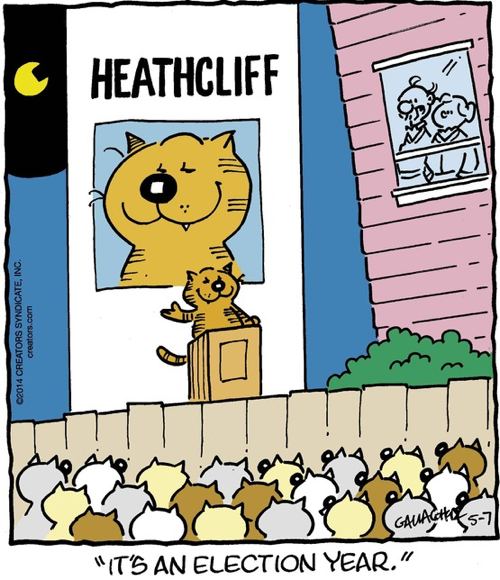 So, I guess Heathcliff must occasionally seek legitimacy from the electorate to continue his reign as untouchable god-king? I’m assuming that this is just a Stalinist sham election with only a single name on the ballot: the campaign poster doesn’t even try to convey even the vaguest of political philosophies to entice the voter, but merely promotes a vision of Heathcliff as omnipresent and inevitable, which is of course its own sort of ideological stance.

I’m not exactly sure why Hi and Lois decided to go with a featureless, inky black floor for their kitchen rather than a more traditional tile or linoleum pattern, but if they thought it wouldn’t show dirt or stains as vividly, they were clearly very much mistaken.