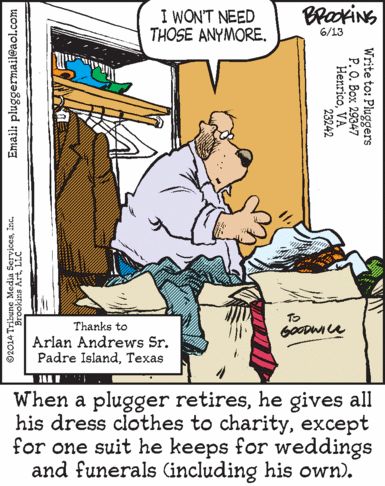 Boy, pluggers sure are getting in touch with their own inevitable and rapidly approaching death, aren’t they? I certainly hope that the first draft of this panel featured our dog-man hero holding up the suit in question and giving it a good, long stare; maybe there was a thought balloon in which he visualized this last good suit on his embalmed corpse, while well-wishers stood around, not looking at him, telling each other in hushed tones that it was better this way, that he was done suffering and in a better place. This panel was of course sent back to Pluggers HQ by the syndicate with “WAY TOO GRIM DUDE” scrawled across it, but I like to imagine it’s still hanging up over the drafting board, as a reminder.

Oh hey Wally and Rachel got married this week, everybody! As you can see, the God of the Funkyverse cannot allow any happy occasion to emerge unscathed, so their outdoor wedding has been disrupted by a sudden freak thunderstorm. They tried their best to finish the ceremony, but as panel two reveals, their friends and loved ones gave up on the event a while ago.

Beetle’s primary and defining characteristics are that he’s extremely lazy and does a half-assed job at everything, so I refuse to believe that whatever desultory, fumbling, fully-clothed sex act just happened in that parked jeep merited any kind of souvenir.

At last, it’s the Wizard of Id–B.C. crossover strip you’ve been waiting for! It’s a golf joke about getting hit in the nuts.