The life of a second-string comics blogger isn’t all shootouts and fresh new characters. Most days it’s just slappin’ down the html and takin’ care of business:

When Jack comes back on foot to lead the mare away, Tommie will regret having brought up the whole “glue” thing. Unless he takes Carol, too.

Marking the return of cherished themes:

Hey, Kaz’s earring is back, and ready for its closeup! Hi, Mimi — how are the kids? Still enjoying 2005? Potatoes, again?

Slylock Fox auteur Bob Weber Jr. has signed on with Walker-Browne Amalgamated Humor Enterprises LLC as a gag writer for Hägär the Horrible, and apparently has designs on drawing it, too.

Keeping folks up to date on beloved comics:

“Daddy” Warbucks’ and Tracy’s crews look for Annie, last known to have been hostage to the Butcher of the Balkans, who The Great Am believes is now in touch with dangerous spy Axel. B.O. Plenty gets a letter with a vintage stamp and no ZIP Code, which gets passed to Dick, who recognizes the handwriting as Annie’s and the contents as the coded location of an abandoned island nuclear facility, to which he boats in the middle of the night.

Tracy wakes up in a hospital in Simmons Corners in June, 1944, recovering from shell-shock sustained at Anzio. Annie says they’ve known each other for years, and that he’s the main police presence in the town where she lives with Ma and Pa Silo.

Tracy seems to have disappeared from the present. An informant tells Warbucks his boss Axel had him collect the Butcher and Annie, but dies mysteriously before he can say where he took them.

Back in 1944, Tracy is discharged. Annie becomes alarmed when he says “there’s a war on”, thinking he believes what she apparently thinks is a charade. She visits Professor Kenyon, for whom she does chores, then gets a call at the Silos’ asking her to meet with the owner of the local newspaper — a Mr. Axel. Axel, a sinister sort, interrogates Annie about Professor Kenyon and his experiments, then sends her away to listen to the “Belinda” radio show, which seems to have a hypnotic effect on people. 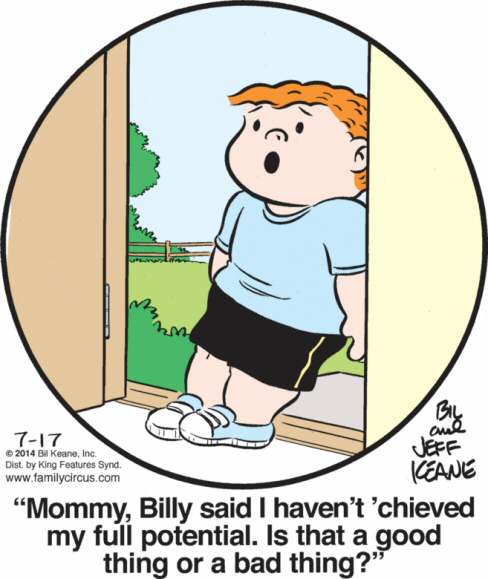 And, of course, slagging on little Jeffy Keane:

“Why no, Jeffy, I don’t know how he could say such a thing! You have totally achieved every bit of your full potential. There, there ….”