Blondie has always been cheerfully hostile towards contemporary pop culture and/or modernity, so it’s pretty impressive that the strip has actually managed to find a musical reference here that isn’t dated or just completely wrong-headed. If it’s being deployed in the context of Elmo aggressively demanding that Dagwood forge an affectionate note from a wildly popular 24-year-old songstress for his own inscrutable and no doubt sinister purposes, so much the better.

So the whole point last week’s noir-ish reverie, at the end of which someone got killed, was to remind Les of the existence of his “kill fee.” In the normal world that humans inhabit, a kill fee is what a writer gets from a publication when they fulfill the obligations of their contract but then the publication decides, for whatever reason, not to publish what they’ve written; it’s less (usually substantially yet) than what they were originally promised for the article, but the writer keeps all rights to their work and can try to sell it to someone else. But in the cutthroat world of Hollywood screenwriting in the Funkyverse, it apparently refers to a fee a writer gets when he decides he hates working on movies and just up and quits, even though he’s already gotten a big check for his script, which sounds pretty neat. Looks like I made the right choice to go west and try to make my own way in the entertainment industry! 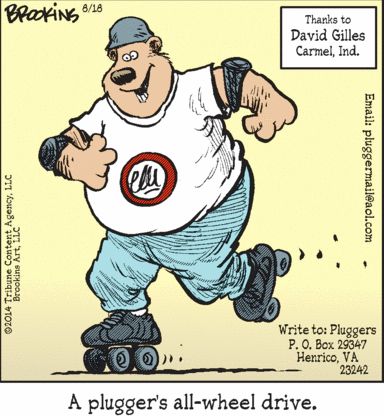 A physically active plugger expressing unbridled and even manic joy rather than down-home smugness or vague unease with modern life? A plugger’s all-wheel-drive that doesn’t refer to a proudly retrograde smoke-belching motor vehicle of some kind? What the hell is this even? Was someone just really, really eager to draw a bear wearing roller skates and a helmet? Not that I can blame them, it’s a pretty rad thing to draw.

While I’m not familiar with the specifics, I’m sure there are any number of belief systems in which the sea is regarded as a single, feminine entity. Over the millennia, she’s drawn tens of thousands of sailors to their doom in her watery bosom, so the idea that she might be constantly murmuring their final terrified blasphemies seems reasonable as well.

I swear I’m not just saying this over bitterness over my own botched attempt to get an academic PhD, honest: I find it really pretentious when people who have non-medical doctorates go around calling themselves “doctor.” Maybe Doc Ock wanted to call himself “Professor Octopus” but then he got an angry letter from the provost reminding him that he was only an adjunct lecturer.

Hello, ladies! Have you ever left the house or had interactions or experiences of any kind? Well, Momma is sorry to hear you’re such a whore.