Well, this is certainly the most shocking development in Apartment 3-G in some time: during Tommie’s multi-month absence, Margo hasn’t gotten bored and come up some new vaguely aspirational business plan, but has instead continued to be a publicist when the plot demands it! You might remember Skyler as the young starlet who Margo’s employee/sex slave/secret enemy Evan flirted with so that Margo would refuse to take her on as a client. Skyler used to be a brunette and then had black hair and now is a blonde, which is par for the course for actresses, I suppose. Less realistic is that she’s wearing a shapeless pink sweatshirt, or that she now looks more or less exactly like Lu Ann, or that Margo is a good enough publicist that anyone would try to hire her after she cruelly rejected them for no good reason.

Since this is Mark Trail, it’s a safe bet that the folks on TV here are aggrieved over some kind of nature or environmental issue, which makes me even angrier that, in an age of rapidly shrinking journalism budgets, Woods And Wildlife Magazine can still afford a high-rise office for its wholly out of touch top editor. Still, Bill Ellis’s uncanny resemblance to LBJ has never been more appropriate than it is here, as he smirks with hooded eyes at some damn hippies protesting on his television set.

Just in time for Halloween, and then for the seven to fourteen months after halloween: as darkness falls, the Parker-Driver clan is going to drive the Road Queen into a spooky, abandoned RV park! How many chainsaw-weilding murderers will be lurking there, and how much money will our heroes get as a reward when they arrange for those maniacs to be captured by the local police, with very little effort on their part? 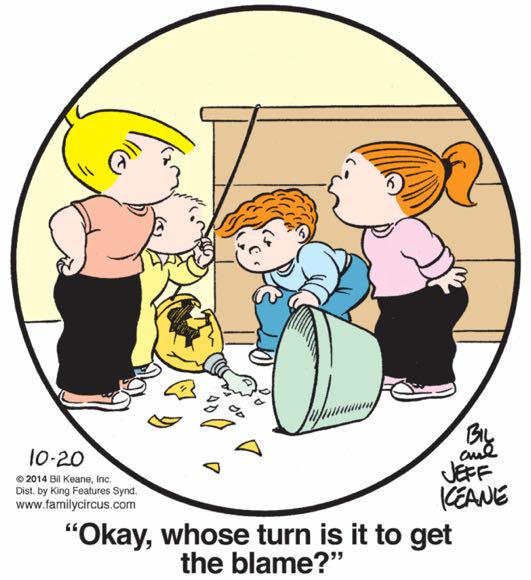 Remember the innocent days when the Keane Kids would cheerfully blame their transgressions on adorable ghost-things “Not Me” and “Ida Know”? Well, that’s all over now. Reality has set in. The kids know that nobody buys that crap anymore. One of them is going to have to take the fall. The question is: who? This will only be settled by an ugly outbreak of violence.

Ha ha, it’s funny because Beetle is injured and writhing in agony and begging Sarge to drive more carefully, which Sarge callously refuses to do! But the real joke is that all those injuries were almost certainly inflicted by Sarge in the first place.