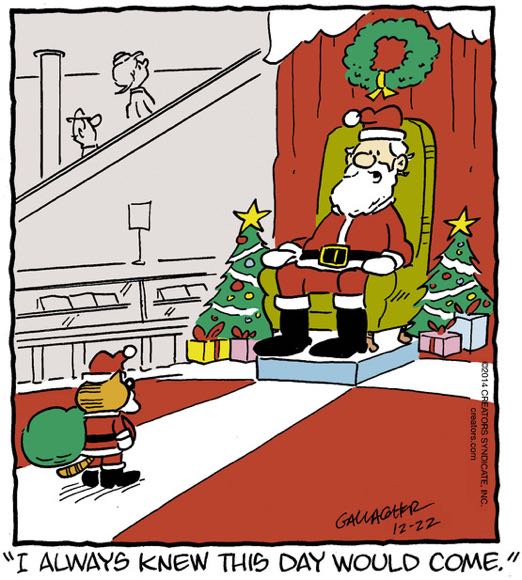 The idea of Santa as an immortal being who’s been delivering Christmas presents for centuries is ridiculous, of course, but the truth behind the legend is much darker than most people can imagine. In fact, “Santa” has been a whole succession of different individuals down through the centuries. In this way “he” is kind of like the Phantom; but whereas the Phantom’s identity passes down peacefully from father to son over the generations, Santa-ness must be taken, with each new Santa defeating his predecessor in single combat to the death. And now notorious asshole and megalomaniac Heathcliff has come to violently insert himself into this ancient tradition. 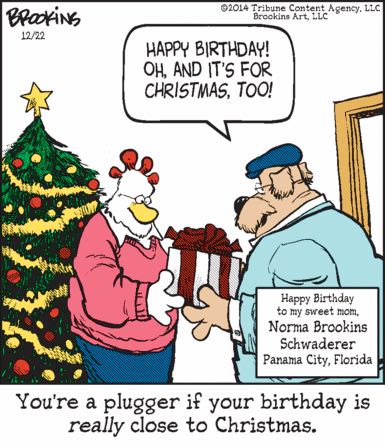 There’s been a lot of dilution of what exactly a plugger is over the years, but I refuse to accept a definition under which just being born in the three-week span from December 15 to January 5 makes you a plugger. D’ya hear me, Pluggers? This is bullshit. How about this: you’re a plugger if you’re cheap and lazy enough to get excited when it turns out your friends and loved were born around Christmas, because that means you only have to buy them one gift a year.

In the wake of Sony’s decision to pull The Interview from theaters after threats from (probably?) North Korea, look for a lot more deranged supervillains to get involved in the movie business. Today it’s just a question of whether a movie should get distribution or not, but soon these despotic maniacs will demand control over casting decisions as well!

I can barely maintain interest in what’s going on in Apartment 3-G these days, but it looks like Margo has managed to alienate yet another personal assistant, requiring Lu Ann to put on a pair of glasses and pretend to be “Clara” again.