I’m not sure which I find more jarring here: the fact that Jughaid has used the flatlander term “spoiler alert” (in Hootin’ Holler, as in many traditional cultures, entertainment takes the form of bards putting their own spin on endless variations of well-known narratives, so the very idea of a novel, linear plot with a surprising ending would be foreign to these children), or the fact that the normally raven-haired Miz Prunelly is suddenly a blonde.

Well, the Dick Tracy-Funky Winkerbean crossover is over, but the Funkyverse still has CROSSOVER FEVER!!!!! With nobody currently willing to cross over with it, though, it’s been forced to mingle timelines with … itself. Yes, there’s now a cross-decade Funky Winkerbean–Crankshaft narrative confluence in progress, about Crankshaft driving beloved (?) band leader Harry Dinkle and the band to some band championship or something. Funky’s installments are using Old Timey Photo Album Frame panels, the strip’s sign for Things That Happened Long Ago, which is confusing since both strips take place more or less in the present. All this timestream mucking about mainly serves to sadly let us know that, since Crankshaft’s life continues beyond this adventure, Harry will never make good on his promise to slide that baton straight through Crankshaft’s leathery old flesh and right into his black, shriveled heart.

One good thing about having a nationally syndicated comic strip: when you experience some minor irritation in your daily life, the rapidly aging and declining comics-reading demographic will get to hear about it, by God. 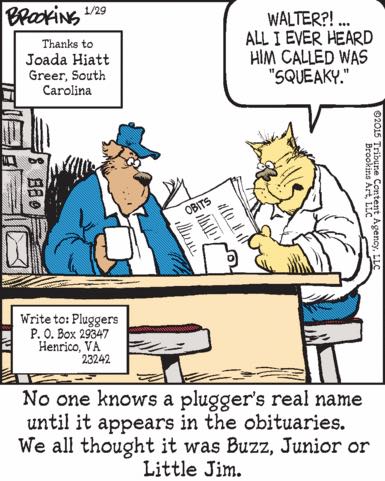 The only time pluggers will be addressed with the slightest glimmer of dignity is when they are already in the grave.