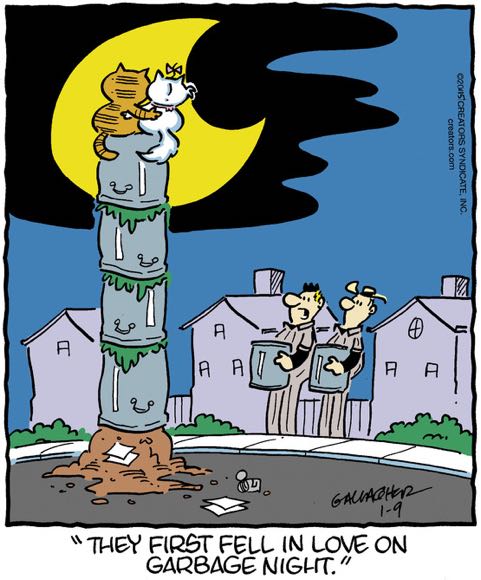 For a town where sanitation is so important to the local psyche that it has inspired a local simian trickster-god, Westfinster’s trash situation is actually kind of out of hand. Nobody ever seems to actually put their garbage inside bags like civilized people; instead, organic matter is just packed into metal cans and apparently left there long enough to become a more or less homogenous slurry. Today we see that this repulsive garbage-goo comes in brown and green varieties, possibly as a result of an ill-advised attempt to implement a composting system.

Clovis’s main schtick in this strip is to be the third-string character who has a rocky relationship with his wife, but I find today’s strip particularly poignant. His marriage may be troubled, but at least his wife hasn’t strayed — and yet he actually looks distraught by this fact. Perhaps something as obvious as an affair would be what was needed to convince them to finally give up on their painful union; mere emotional incompatibility isn’t enough, as much as it’s destroying them emotionally.

Today’s Momma features the usual Momma-Francis infantilization routine amped up to truly uncomfortable levels and manages to slip a fart joke in as well, but at least we can give thanks for the fact that breast-feeding was out of vogue for middle class families when Francis was a baby.

OK, fine, it was probably a little harsh for me to say it was stupid for Spider-Man to go around fighting crime with his cell phone on his person, since smartphones are incredibly useful objects for communication, wayfinding, and tracking down info fast. But still, the practical question remained: where would he keep his phone in his skintight costume? Well, today we learn the answer! (He keeps it right next to his balls.)

“Only good things have happened to me so only good things can happen to me! I’m on a nonstop rocketride to the moon, emotionally! For a little kid, I sure never have heard of what happens to characters in Greek tragedies who exhibit hubris!” 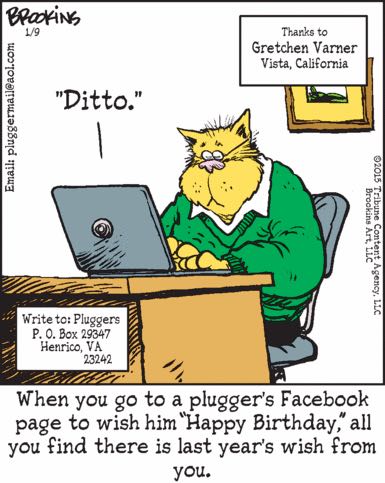 You’re a plugger if one of your Facebook friends died more than a year ago but nobody’s bothered to tell you.