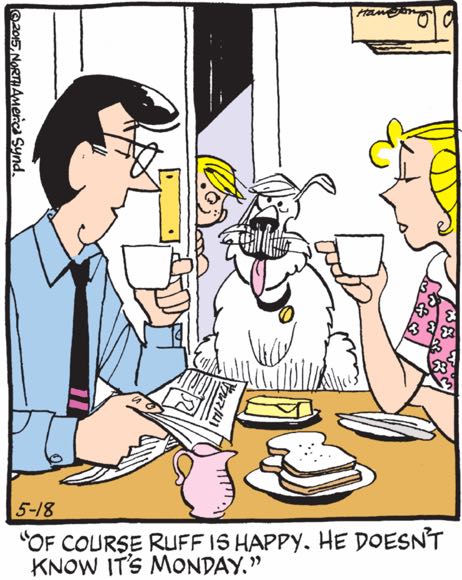 Dennis usually gets to let loose the menacing bon mots in this feature, but today it’s Henry’s turn to engage in a little light cruelty. “Look at that dumb dog! Doesn’t even know what day it is. Garfield, now there’s a cartoon animal that knows how to read a calendar, by God.”

Terry Bryson has decided to hang out with her dangerously obsessed ex, engaging in risky activities like unsupervised balloon rides over jagged mountain peaks and, apparently, riding on roller coasters that have no seat belts or adequate restraint bars. “TAKE ME, DEATH,” she’s basically shouting in panel two, hoping to be torn from the seat by centrifugal force and hurled across the amusement park. I think we’re finally learning that Terry’s sorely missed the adrenaline-soaked thrill ride that police work provided on a daily basis. Teaching dim trophy wives how to avoid phishing scams simply won’t cut it for her any more.

You know what’s a cool way to improve your social standing in school? Bring your smirking high-powered lawyer to a meeting at the principal’s office. It’s a power move that other kids respect!

DEAR GOD IS THIS WHAT I HAVE TO LOOK FORWARD TO