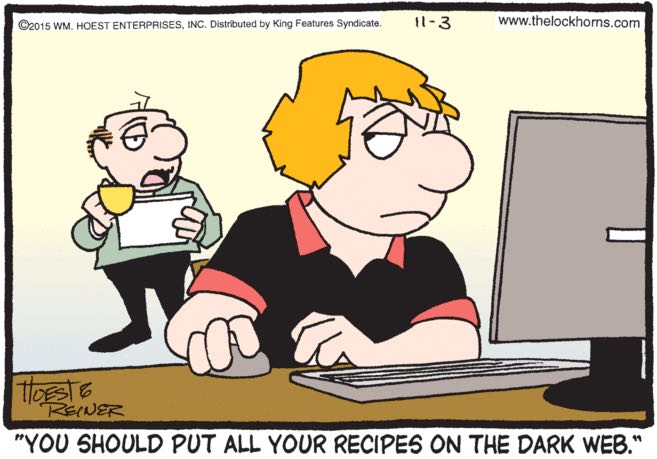 Dozens of malicious HACKERS sit around a conference table in a murkily lit room. All have laptops in front of them; banks of computer servers with blinking lights line the walls.

HACKER #1
Gentlemen, I’ve summoned you here today to present you with … some disturbing content.

HACKER #2
Please. We’re the kings of the dark web. We’ve seen and heard things that would send normal people’s minds spinning into insanity.

HACKER #1
That may be, but this is horror of a different kind. I want you to turn your attention to today’s Lockhorns.

HACKER #3
You mean the comic? From the newspaper? I didn’t know they were still making those.

HACKER #1
Please point your browsers to the “Comics Kingdom” website, where you’ll be able to find the most recent panel.

HACKER #2
But it’s a paywalled site! How can we see it without paying?

All the HACKERS laugh uproariously as they effortlessly HACK the site with a few keystrokes. Their laughter ends abruptly as they see today’s Lockhorns panel.

HACKER #4
In a newspaper comic strip.

HACKER #2
Does this mean…

HACKER #1
Yes. Hacking is over. Being a hacker, knowing about the dark web … it’s not cool anymore. None of it.

The hackers close their laptops and begin smashing them to bits with HAMMERS.

HACKER #3
So, anyone else have any life skills?

HACKER #2
I waited tables for a while.

HACKER #4
I can do some bookeepping.

Barney Google and Snuffy Smith and The Family Circus, 11/3/15 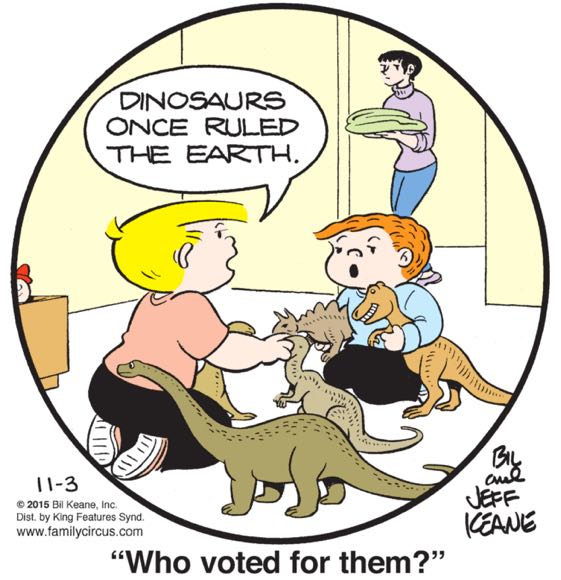 Here in the United States it’s Odd-Numbered Election Year, which is important to voters in a few states (enjoy, Louisiana!) but mostly pretty low-key. That hasn’t stopped a couple of longstanding legacy comic strips from getting political, though — specifically, from expressing outright contempt for the whole concept of electoral democracy. How did the dinosaurs come to rule the earth? Through some fair election process? Don’t be a chump. They seized control of the planet with their teeth and claws. Maybe the piddling political issues of the day can be resolved by voting, but when it comes to basic questions of species dominance, we still live in the constant war of all against all. Snuffy’s neighbors might feel smug about performing their so-called “civic duty”; but Snuffy knows he’s doing the real important work, which is preventing our planet from being overrun by fish-men.