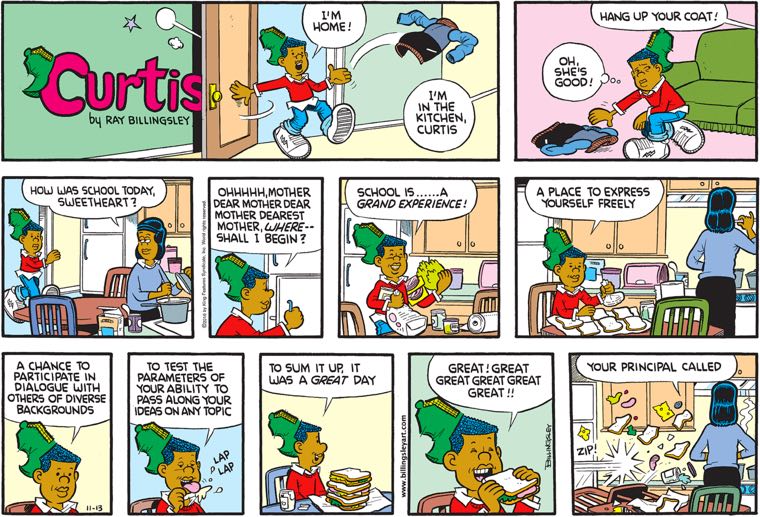 I’m going to start out by saying something nice about a comic, for once! Say what you will about Curtis, but, unlike a lot of the strips I talk about on this blog, it never phones it in. The gag here is one we’ve seen a lot in the strip, but I really enjoy watching the little details of Curtis assembling his three-sandwich stack over the course of this conversation, up to and including him licking mayo off his knife, like you do (or at least like I do). The realism is a nice setup for him to dash off in the final panel, leaving a cartoonish cloud of sandwich debris in his wake. 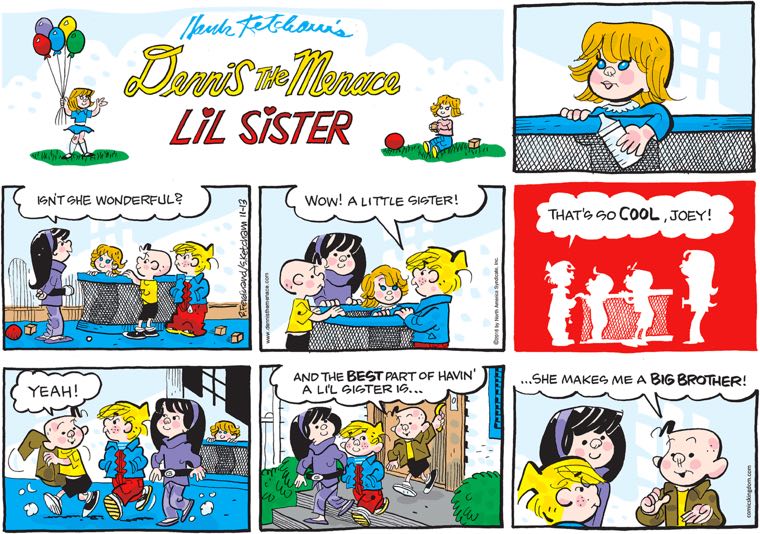 It’s weird that everyone’s acting like this is Joey’s brand new baby sister despite the fact that she’s clearly at least 18 months old, right? Of course, her eyes are a terrifying, milky, pupil-less blue, so she’s also clearly a space alien or a demon from hell. Presumably she hatched from a leathery egg twenty minutes ago and has used her awful mental powers to convince the children that she’s always been here and that her nightmarish agenda for our planet is “wonderful” and “so cool.” 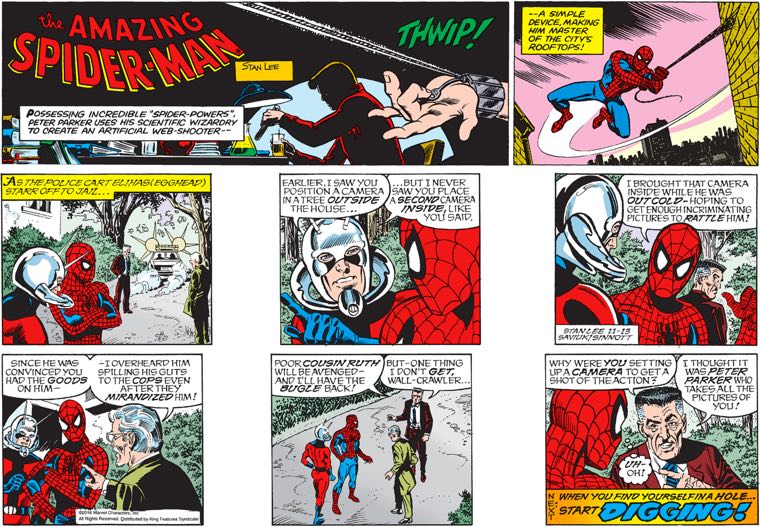 So when earlier this week we learned that Spidey had webbed a camera to the ceiling of Egghead’s den, I assumed that the writers were working with a vague memory that he had set a camera up at some point earlier in the storyline but had forgotten that in fact that camera was in a tree out in the front yard. But, nope! Turns out that in fact Spidey just ran outside and got said camera moments after JJJ bonked Egghead unconscious. This is hilarious in and of itself, but it’s even more hilarious that experienced newspaperman Jameson is just now putting together how suspicious that all is. I’m looking forward to how this plays out, what with the NEXT narration box giving Spider-Man the exact opposite of standard good advice.

This is definitely one of Slylock’s most giggle-worthy mysteries to date, from the crime itself — do we want to live in a world where it’s illegal to mess with dandyish beavers by forcing them to watch televised chess? — to the puzzle’s solution. Look, Count Weirdly is weird! It’s right there in the name! Maybe he likes to eat his soup with a fork. Maybe that’s why it’s taken him 15 minutes to eat a single bowl of broth!

Wow, I’m not sure what strip I expected to see discussing the corrosive effects of corporate capitalism on the human soul today, but it sure wasn’t Shoe!