Last week’s Mark Trails were a between-stories palate cleanser that depicted a noble woodland creature (a bear) in search of a meal, which I didn’t post here because they were kinda dull. Today’s Mark Trails is about another noble woodland creature (Mark Trail) in search of a meal, which he’s having handed to him in a huge, steaming stack, and I’m posting it here because it’s amazing. That pile of flapjacks is hypnotic, and it’s totally worth violating the 180-degree rule between panels one and two to keep them in the same spot in the frame, focusing our attention on them and emphasizing the fact that nobody in the room can take their eyes off their pancakey deliciousness.

Meanwhile, Rusty wants us to know that he enjoys pancakes too. Tough shit, Rusty! Did you narrowly escape an exploding island anytime recently? No? Then how about you sit there in blessed silence and let Mark methodically and manfully devour that entire heap of griddled delight in peace.

Hey, remember when someone wrote into “Ask Wendy” with a professional dilemma that blatantly mirrored the Iris-Zak-Wilbur triangle? Mary told the questioner they should make a list of pros and cons for each of their options. Well, looks like that didn’t work! Looks like Mary’s whole professional advice-giving style is bullshit. Looks like Wilbur’s gonna have to come back from Antarctica and CLAIM WHAT IS RIGHTFULLY HIS, by which I mean his advice column, but probably Iris will end up back with him too because this strip always makes a list pros and cons for every potential narrative resolution and inevitably settles on the least interesting option. 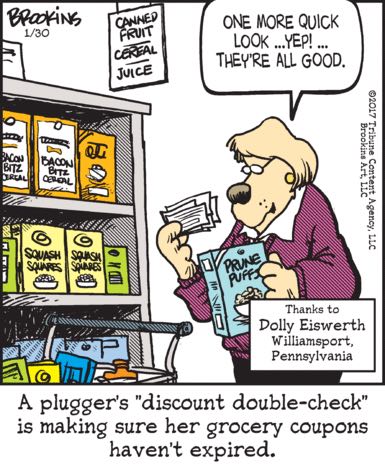 Usually when Pluggers presents a plugger’s version of some common phrase, it’s supposed to be a simpler, down-home alternative to some fancy pants elitist institution. But the “discount double-check” is a service offered by State Farm to its car insurance customers and advertised in heavy rotation during NFL games, so this cartoon is … confusing? Do pluggers not use car insurance, because only a bad person would have a car accident, probably because they’re listening to rap music? Or does State Farm cater to effete city dwellers? It’s got “farm” right in the name, darn it! 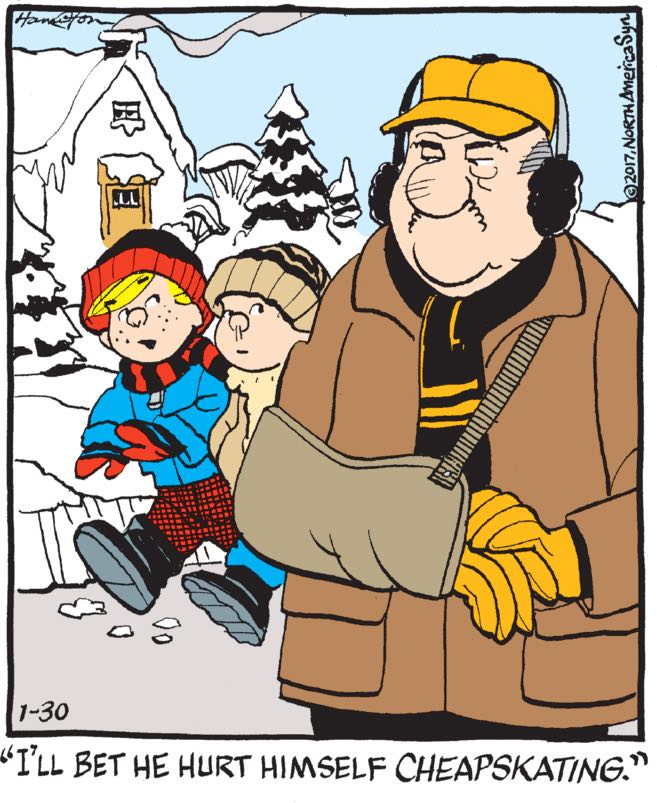 I mean, I guess that’s what they call it when you try to leave the Cheesecake Factory without paying and sprain your elbow as security wrestles you to the ground!