I can’t remember where I read it now, but there’s a line in a review of Rogue One that I liked, discussing Darth Vader’s appearance. This is the first film where David Prowse didn’t play the body of the character, and the reviewer said that in the new movie Spencer Wilding, the new actor, looked and moved differently, so “he just looked to me like a guy in a Darth Vader costume, which, I suppose, is what he was.” Don’t we all, in essence, play-act the roles in life we aim to inhabit, uncertain of when the moment will come when we finally make them our own? And isn’t this made more difficult when someone else is so strongly associated with the job? It might’ve been the dogs, with nostalgia for their now vanquished nemeses, who explained to the other animals the utility of the postal service after the beasts took over; and, like all the creatures trying to ape the infrastructure of human society, this mailbear is doing the best he can. But it’s his hesitancy, his sense that he’s not really a postal worker, that he’s just a bear wearing an XXL uniform torn off a long-ago-eviscerated H. sapiens letter carrier, that Shady Shrew is exploiting here. Who’s to say that he isn’t in disguise, after all? Who’s to say that they aren’t all going through a vaguely absurd pantomime of their vanquished betters, with their bowler caps and trench coats and magnifying glasses?

Meanwhile, over at Dick Tracy’s heist plot, the Brush, a man with a freakish shock of hair coming down from his forehead and completely covering his face, is about to change out of his landscaper’s uniform and into a security guard’s uniform, two disguises that will definitely let him blend in undetectably and not draw any attention to himself whatsoever. 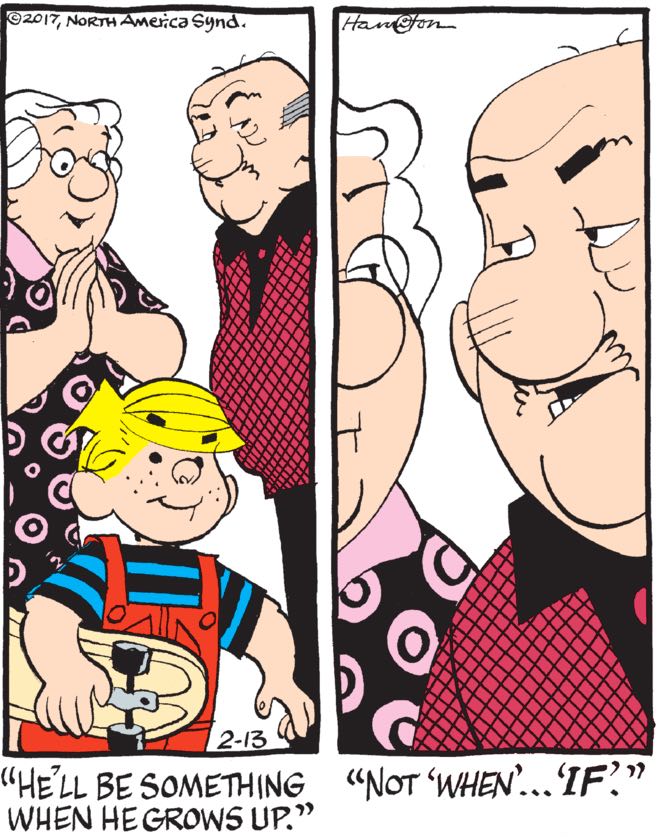 I guess it shouldn’t come as a surprise that Mr. Wilson is planning to murder Dennis — he’s old, he’s lived a long life and there isn’t much left to it, prison and the electric chair don’t scare him, etc. — but it’s pretty shocking to see him admit it so openly to his wife.

I spend a lot of time grappling with the horror of Marvin’ endless poop jokes, but it’s only with today’s strip that I feel like I get the rationale behind them: apparently they’re part of some misguided Freudian belief that we’d all be better adjusted if we didn’t have to obey society’s oppressive rules about going to the bathroom in a toilet and just, like, shat whenever, man, you’re not the boss of me and my gastrointestinal tract. 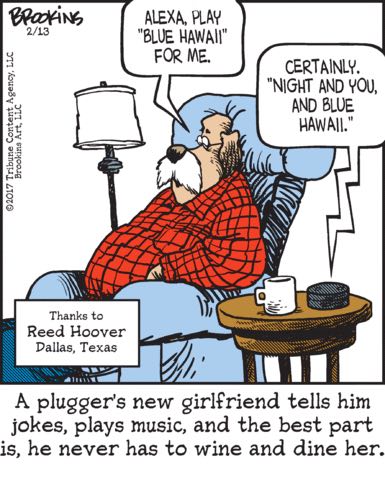 Pluggers’ dreams of a sex-robot companion became a lot more attainable once they realized that due to their age and general physical decrepitude they had lost interest in sex a long time ago.