I can’t stop looking at that weird little gadget (?) propped awkwardly on Killer’s pillow in panel one. It’s like someone drawing this realized that “uh, probably military hospitals use, like, advanced medical technology now???” but wasn’t sure what exactly that might entail, so rather than just draw a groggy-soldier on a cot, they drew a groggy soldier on a cot with a cell-phone-sized black box hanging off the side of his pillow, like maybe it’s clipped on, I dunno. And it’s recording his … heartbeat or blood pressure, even though it’s not connected to him at all? Or his breathing? Maybe his breathing? All this high-tech business really gets in the way of a solid gag about how Killer’s “illness” is that he’d rather be on the beach, gambling and looking at tits.

Ha ha, yes, this is just another in an endless, soul-crushingly eternal series of “Crankshaft says the darndest things” gags, but wouldn’t it be great if some lady did give Ed a Trojan hearse for Christmas? Like, you know, a big black car with space in the back for a coffin, and Crankshaft accepts it thinking it’s an offering to the gods and brings it inside his walled fortress, but inside are dozens of hidden Achaean warriors, who emerge at night and wreak terrible destruction. I’d like to see this storyline depicted over a period of six to eight weeks, with particular focus on the lamentations. 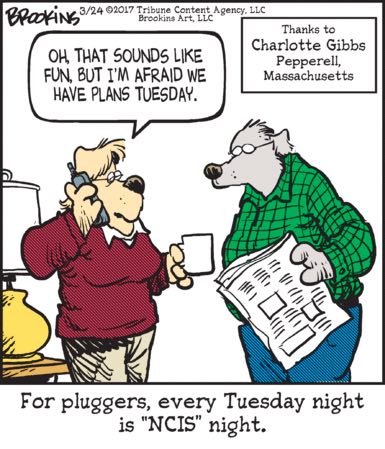 Welp, the bedroom eyes the she-plugger is flashing here seems to confirm something hinted at earlier: NCIS has such high ratings among the plugger set because it’s a Pavlovian sex trigger. Nobody actually watches it.