Welp, looks like Mark’s very self-important reveal of his employer has gone right over the bald head of his kidnapper. Sorry, Mark! Usually when you tell people that you write articles for America’s #1 glossy lifestyle magazine for the aspirational outdoorsperson, they show some respect. Not so when you deal with illiterates and ruffians, it seems. And yet … who’s this gentleman in panel two? Is he the real power behind this criminal gang, one or two steps up the Bald Guy Hierarchy? He’s wearing a suit and tie and has a neatly folded pocket square, which means he no doubt appreciates long articles about, like, new kinds of tents or whatever the hell it is Woods and Wildlife publishes. Anyway, I’m not sure if this guy is really involved in our story, or if he’s just some fellow passing through Rapid City Airport, or if he’s the Kingpin, heralding a crossover event that will establish Mark Trail as part of the Marvel Cinematic Universe, but his little smile shows that he knows what’s up.

I had to laugh at the “YELLOW MASK” label in the final panel, an explanatory box of the sort usually reserved in Dick Tracy for tiny gadgets or whatever. Then I remembered that, in theory, anyway, the primary venue for Dick Tray comic strips is the daily paper, where they’re published in black-and-white, so the need to label the visual joke makes slightly more sense. “Look, it’s, uh, it’s a mask, that matches his coat, which you also can’t see the color of but we assume if you’re reading this you know it’s yellow? Just a mask, for his eyes. We know it’s a little confusing. He’s not supposed to stick his dick in it or anything.”

One thing that comics are good for is creating new Homeric epithets out of whole cloth and just pretending they’re things that normal people would say in real life, like “badge-boys!” I also like Spider-Man acknowledging that while being a police officer is a full-time job, being Spider-Man is just kind of a hobby he indulges whenever he feels like it, because with great power comes great responsibility so long as there’s nothing good on TV. 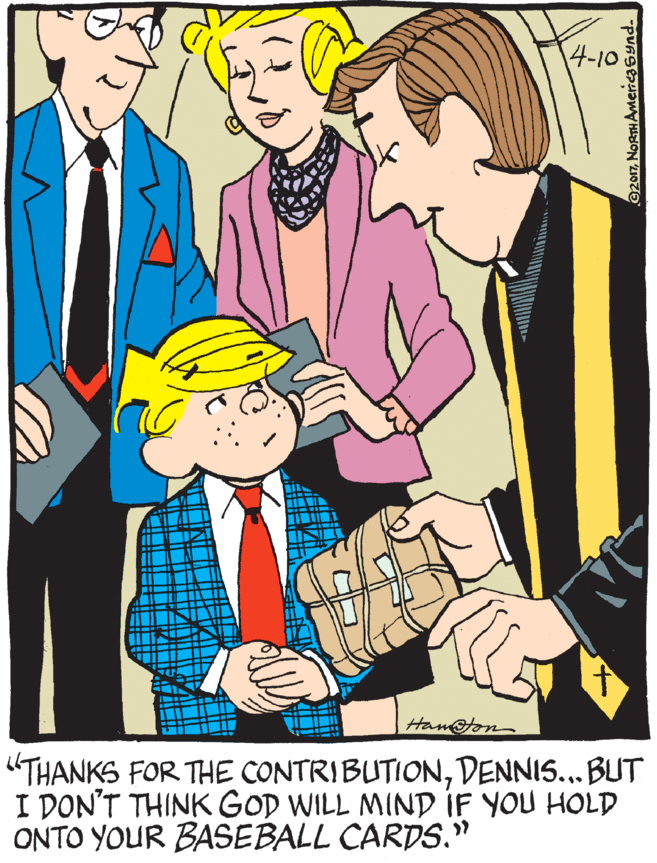 I’m pretty sure that a young child putting his most treasured possessions in the collection plate at church is … about as non-menacing as you can get? Unless he’s trying to bribe God! That’s fairly menacing, theologically speaking.