So, today’s Crankshaft only makes sense to people who understand all the weird nooks and crannies of the Funkyverse’s decades-long chrono-disjunctive narrative arcs, and, due to my many sins, I am one of those people, and as a punishment I guess I’m going to explain it to you? See, this takes place a decade in the past compared to Funky Winkerbean, and so Les is still hawking Fallen Star, his book about the murder of John Darling, who was the father of his soon-to-be-in-this-timeframe-dead wife’s biological son’s future wife. He spent years researching this book, which revealed that John Darling was killed by Plantman, as depicted in the final installment of the failed Funkyverse strip John Darling. The book was a financial failure! But Lillian, who has gone to this seminar on how to write a book only to encounter an author so unaccomplished that he held a book signing in the illegal bookstore she runs in her attic, is full of reassuring sentiments. Don’t worry, she says to Les: someday you’ll write something special, once your wife dies of cancer — like, I don’t know, the very book that appears in the first panel??? Anyway, the lesson here is that if you want literary success, you can’t write about just anyone dying, it has to be about someone you really love.

Meanwhile, in the Funkypresent, it turns out Les is spending the energy he’s supposed to be channeling into yet another book about Lisa into primate-terminology-banter with his current, alive wife. C’mon, Les, the misery porn’s not going to write itself! 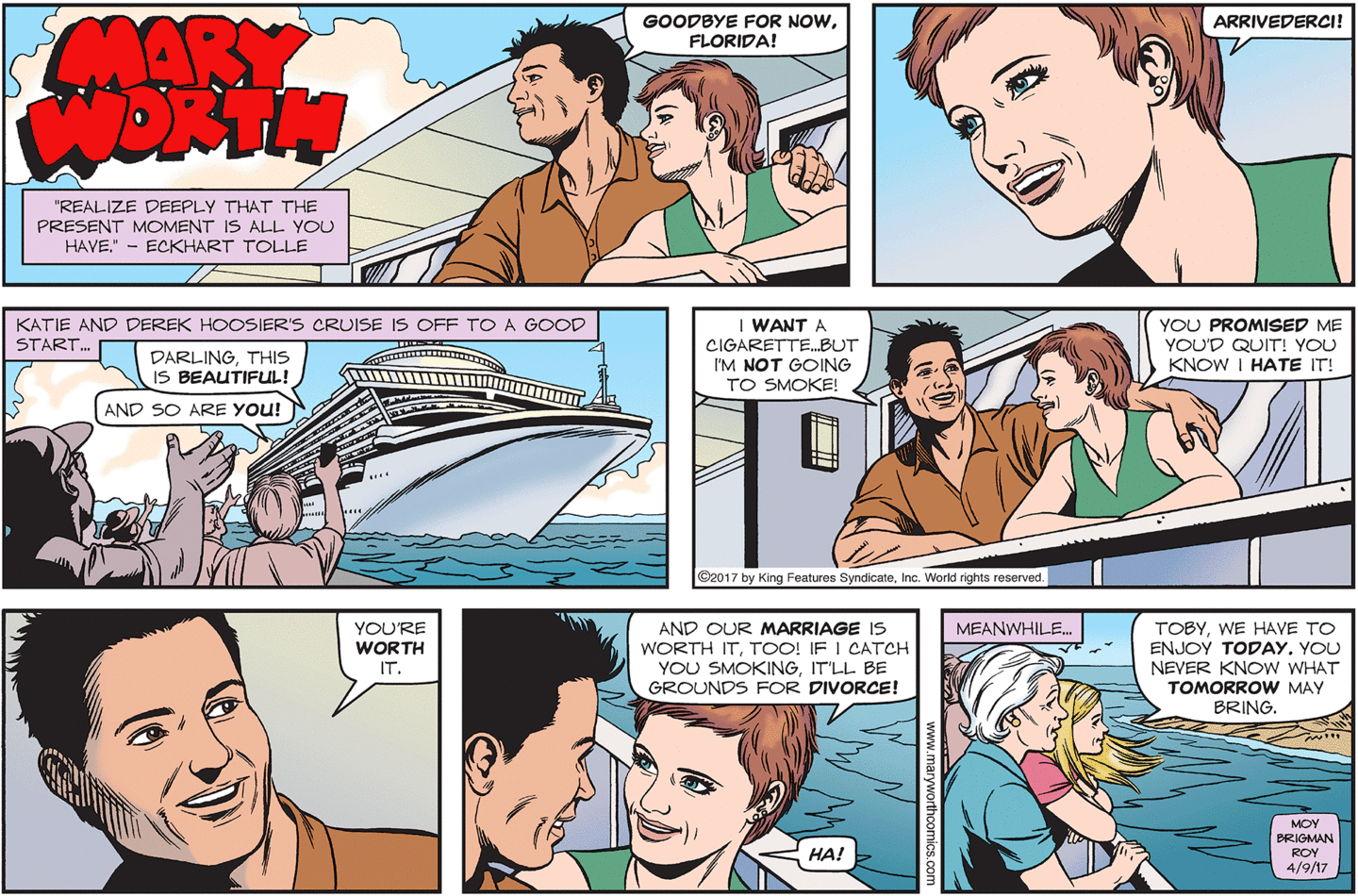 You know, the thought of going on a cruise has never really appealed to me, but the first couple panels here show me some of the charm. Who hasn’t wanted to yell at Florida from a safe distance away? “FUCK YOU, FLORIDA,” is what I’d shout. “YOU FUCKIN’ SUCK.”

Meanwhile, Toby is getting awful philosophical in the last panel. It’s true that you never know what tomorrow may bring! Maybe it’ll bring some guy out of his mind on nicotine withdrawal, just stabbing everyone who gets in his way on the no-cigs hell-cruise that destroyed his will to live! Who can say!

It turns out Roz, a major character in the long-running syndicated comic strip Shoe, is bisexual! This is an intriguing revelation, but it’s not an excuse for running a strip without a punchline of any sort?