Memorial Day is supposed to be dedicated to honoring those who died in the service to the United States. As it originally developed in the 1860s, this was generally understood to mean specifically those who died defending the Union in the Civil War, which is why it wasn’t observed in the South until after World War I, but in recent decades the “killed” part is more and more frequently elided until now people mostly treat it as an extra Veterans Day, where you’re supposed to be nice to people in the military generally, like Dag and Blondie are to their neighbor who has a wildly differing anatomy than they do. I can’t decide if Beetle Bailey’s refusal to mention Memorial Day at all is better or worse than Blondie’s take. Perhaps they want to acknowledge that, since Camp Swampy seems to exist in a division of the military completely isolated from any combat activities, none of the characters even know anyone killed in battle, so a Memorial Day strip would be inappropriate.

But no matter who we supported during the War of Northern Aggression, we can all agree about one thing when it comes to Memorial Day: grilling is fun! Almost as much fun as contemplating the tangled chronology of the Funkyverse strips, something said strips seem determined to force me to do no matter how little I want to! Today’s strips really bring home the comic book time nature of the Funkyverse’s chronology. If one of us living in the ordinary space-time continuum mentioned “something that happened every year, ten years ago” it would sound like nonsense, but it fits in with the nature of Funky-reality: Funky Winkerbean takes place a decade after Crankshaft, and both strips cycle through the calendar but never actually move forward into the future. The implication that those Centerville explosions stopped around ten years ago is truly chilling, because it means that Crankshaft himself is always on the verge of dying, but his cruel creator will never let him cross over to the other side of the veil.

I know that most of us read the colorized comics online these days, but keep in mind that the daily strips are still created with a black-and-white newspaper medium in mind. That means that the original artist punted an important decision to the syndicate coloring staffer today: are we to understand these implements to be made of camel flesh, and thus the same color as the rest of this beast, as the lack of any line at their bases might indicate? Or should they be thought of as metal blades that have burst forth through the camel’s skin and muscle? While the colorist has clearly gone the second route, I’m disappointed that he didn’t follow that idea to its logical conclusion and add copious amounts of blood. 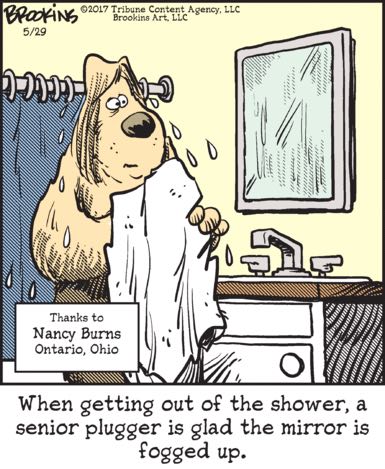 Pluggers are of course nightmarish man-animal chimeras who realize that they are abominations against God’s law, so obviously they go out of their way to avoid looking at themselves. (I was originally going to write “Ha ha! Pluggers hate their bodies and are full of self-loathing,” which is of course the actual joke of this panel, but then I got too sad.)