It’s true that whatever media conglomerate owns the film rights to the Marvella franchise botched the initial rollout. What with the notoriously troubled production of the first movie in the series, the studio naturally decided to dump it straight to DVD — but surprisingly strong sales got people excited enough to do a theatrical release for Marvella 2. But for a big rollout like that to succeed, you need a huge marketing machine. So yes, MJ is going to have to do publicity not just in San Francisco but also Denver. The studio has just that much riding on the success of this film. Don’t be surprised if they try to jam in an appearance in Phoenix on this junket too. No expense will be spared!

Speaking of sparing no expense, one of the fun things about living LA is that it’s incredibly expensive but it’s also full of transplants from New York, an even more expensive place, who assure you that $2,000 a month for an unassuming two-bedroom bungalow in a marginally sketchy neighborhood is “a real bargain, you’d pay twice that much for a studio in Manhattan and you wouldn’t even have a yard.” So yeah, I can see that planning a SoCal wedding might seem like a bargain if your frame of reference is the tri-state area, but neither Aunt May nor Mole-Man have any family in the region (his being enslaved by the foul Tyrannus miles beneath the Earth’s crust and hers being, uh, Peter and MJ), so they might want to look further afield. I hear Denver is nice! 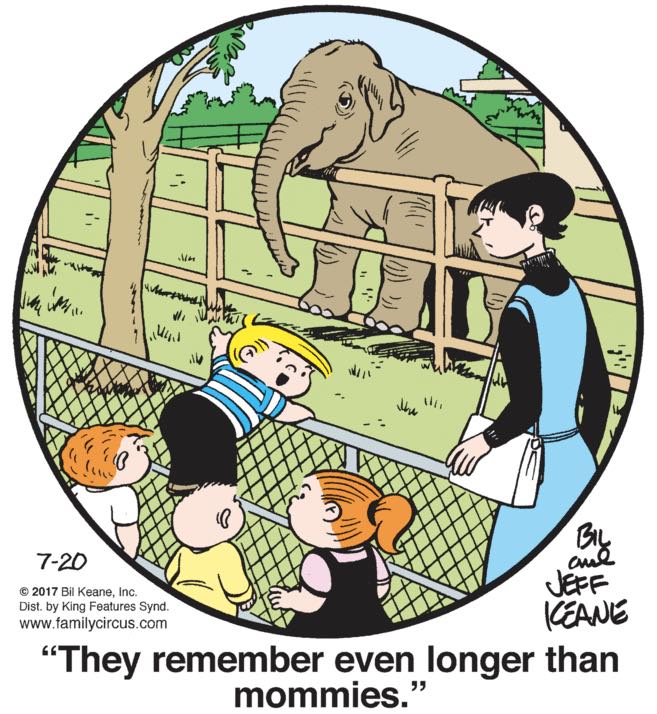 The Family Circus, being largely pieced together from decades-old art, preserves an earlier America where we were much less paranoid about safety, especially when it came to children. For instance, in a post-Harambe world, would anyone let a kid climb on a short fence separated from a potentially dangerous elephant by just a few feet of level grass and another, equally short fence? They might, if that kid were Billy, and they got to know him for a few minutes.

Haha, whoops, sorry to rain on Rex’s nerd dreams, but li’l John Carter was named after something actually cool. I assume Rex will be angrily muttering that Margie is a “fake geek girl” under his breath for the remainder of her visit.