Newspaper Spider-Man is already famous for having whole narrative arcs play out without the title character actually doing anything, but today’s strip is even better, providing us with an little drama that takes place entirely within the context of the villain’s monologue, with our protagonist and the other characters just kind of dumbly staring at him.

I have a lot of questions about the Official Fountain Of Youth Chalice. Like: if it’s made of pewter, as it appears today, or gold, as it appeared last week, how did it shatter so easily? If it’s as important as all that, shouldn’t Tyrannus have several spares? Will some Morlock artisan need to use the only remaining chalice to craft a new backup? Wouldn’t it be easy enough just to use the chalice to measure the actual recommended dosage of Fountain Of Youth Water so that we would know how many milliliters are necessary and dispense with the need for a chalice altogether?

Undercover cop Lee Ebony, currently working deep within in the Neo-Chicago criminal underworld as “T-Bolt,” is taking care to report back to police headquarters using an encoded message in case her phone is tapped, as the footnote in the first panel helpfully indicates. Unfortunately, Sam Catchem seems to be under the impression that if her phone is tapped it’ll only record her end of the call, so he’s just answering using people’s actual names. Admittedly it gets confusing that the main bad guy’s name is actually “Mr. Bribery,” so it’s unclear if he’s talking about him or just the abstract concept of bribery, but either way this is bound to raise suspicions.

“…to my work! Ha ha, yes, as a handsome, well-paid doctor I’m very committed to my career. [suddenly speaking much faster and more quietly]also i’m still married to my wife and we’re not in an open relationship or anything, she has no idea i fuck my young employees on the regular[normal speaking style] So, you definitely have the apartment to yourself tonight, right?” 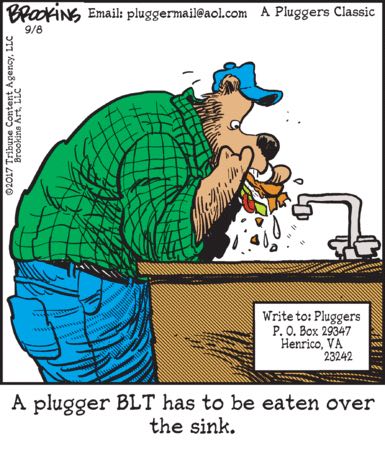 Ahh yes, a man-bear’s eyes bugging out in panic as he tries to cram an overstuffed sandwich into his mouth before too much food falls into the sink, forcing him to scoop up the soggy scraps with his hands for the second round of feeding. A classic indeed!