A long while back my daughter Cousin Lumpy came home from preschool and announced that they had a “case of headlights,” as if Fawn Valley Montessori had suddenly gone into auto parts distribution. Adorable, am I right? Not at all creepy or horrifying. See there, Rhymes with Orange? That’s how you do parasite humor! Not like this. Never again like this, please?

When Sally first showed off her hairstripe in July 2016, it was a narrow band of purple in her signature jet-black 1970s hair helmet. Fashion-forward Aunt Lumpy tells me these things need to be maintained or they grow out. But Sally’s seems instead to be spreading. Distressing, sure, but nothing to cut off your thumb over. 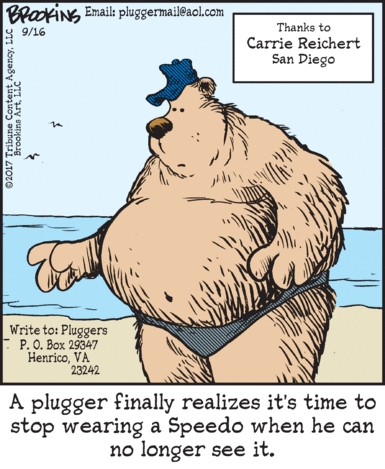 After the explosion, the beaches of San Diego were littered with scraps of nylon, tufts of fur, and the bodies of suicides who could neither forget what they had seen nor live with its memory.

Time once again for Uncle Lumpy Reads Comics Even Josh Doesn’t Read, So Nobody Has To Except for Poor Me, a regular feature. Sad, because IMHO this strip has been on a narrative and artistic roll since March — seriously, click to zoom that middle panel; go ahead, I’ll wait.
⋮
We’re wrapping up the moody, atmospheric “Death of the Phantom” story, and it falls to me to pick winners and losers:

Hey there faithful reader! I’m sitting in for Josh through the 24th while he takes a well-deserved break. Give me a shout at uncle.lumpy@comcast.net if you have access or comment problems. Enjoy!