If I know my commentors, if I did a post that was just like “what the fuck is this comic about,” a critical mass of you would say “Josh, the ‘pope’s nose’ is the fleshy bit on the butt of a turkey that the tail-feathers grow out of [Google Image Search; TRIGGER WARNING: photos of fleshy turkey bits], everyone normal knows this and the fact that you don’t proves you’re a coast elitist and/or an idiot.” Nevertheless I feel confident that there is a silent majority of you who will welcome this information, and in fact many of you are grateful for the reassurance that you did not have a stroke while reading this strip.

I guess we all assumed that Walt would finally, blessedly die as a result of falling off the back of a garbage truck, but I guess in fact he’s going to be murdered by an enormous and very angry turkey who he has unwisely provoked. Whatever works, I say!

Oh, OK, it turns out the janitor was sent back in time from the future, presumably to prevent some awful turn of events and keep history on the right path. Considering how much suffering the characters in his orbit have endured, imagine what sort of global cataclysm his actions are holding at bay! Anyway, this is a good explanation of why the Funkyverse timeline has gotten so messed up.

So it turns out that turkeys have their own internal system of carceral justice, complete with state-enacted executions, but then all of them can also be killed and eaten by humans at any time, and that’s totally separate from their legal system or moral code. Grim stuff! Enjoy your Thanksgiving dinner, everybody!

Look, I’m kind of face blind in real life, with actual human faces, and so since I’m dealing with a cartoon face here it’s wholly possibly I’m about to give you a big infodump about the wrong person, but I think that’s supposed to be Susan Smith, who in the long-ago pre-time-jump era of Funky Winkerbean was one of Les’s students, who developed romantic feelings for him somehow and then attempted suicide when he didn’t return them, and then years later came back to Westview herself as a teacher, and was of course enraptured by his prose about his dead wife Lisa, then eventually proclaimed her renewed love for him and there was briefly a moment where it seemed like she might be a romantic rival for Cayla (remember, this was a woman who tried to kill herself because she was so in love with Les when he was her teacher and she was a teenager! gross!) and despite some Three’s Company-style misunderstandings Cayla eventually won (“won”) and so Susan slipped quietly out of town. You’ll note in that last linked strip she says she’ll be “first in line to see” the Lisa’s Story movie if anything ever came of it, so maybe she was maybe one of the few who actually saw Marianne’s improbable Oscar-winning performance. On the other hand, the first panel here says that we’re flashing back to “several years ago,” and it definitely seems like she’s about to jump into the river, so maybe she never got to see the movie, a truly devastating final Les Moore-related tragedy in a life that was full of them.

Ha ha, it’s funny because St. Peter, who was granted the keys to heaven by Jesus himself, wants to condemn this dog to eternal torture, in hell! Anyway, if you were wondering if you were still going to have to/be able to urinate in the afterlife, Rhymes With Orange is here to tell you: yes.

Oh, sorry, Judge Parker readers, we know you were all alarmed that something interesting and exciting seemed to be happening in this strip, but don’t worry: this week we’re getting back to the wall of emotionally fraught post-divorce scold-text that we know is the real reason you tune in every day. 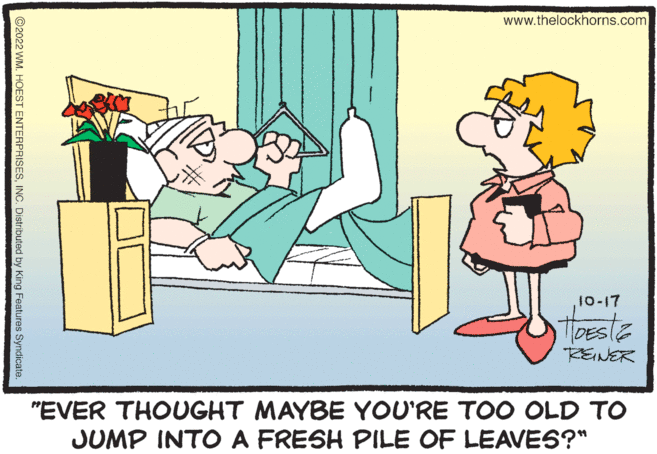 I love this panel because it tells us that there was a brief moment where Leroy experienced a moment of pure, childlike happiness. It was of course immediately followed by pain and trauma. This is the nature of the Lockhorns’ reality. I like the black eye he has because it lets us know that whatever he hit, he hit it face first. 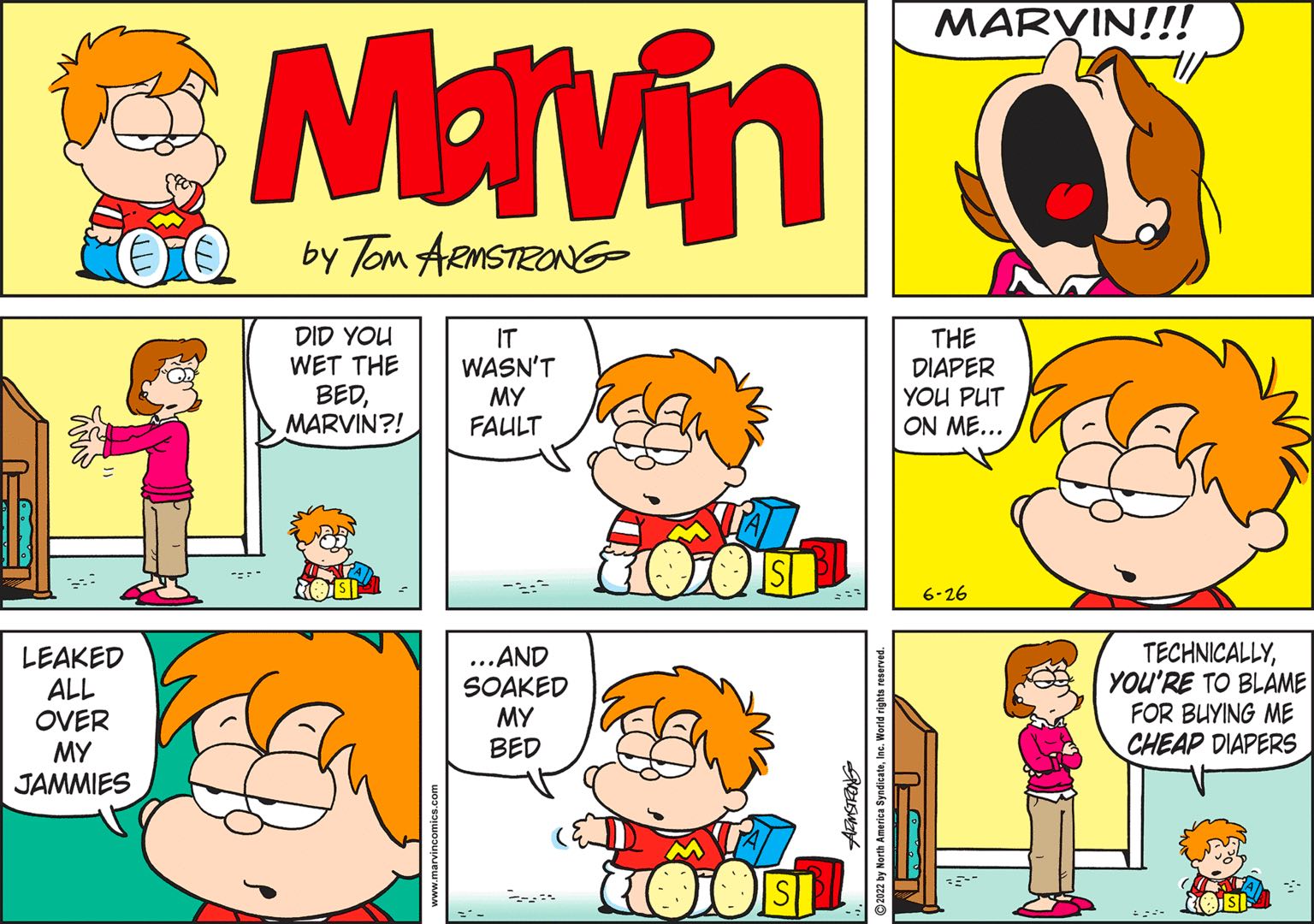 Look, I get it. Marvin, the strip, wants to “have it all” as a comic strip. That means that it wants to be a strip about an infant, and wants to be a strip where that infant delivers sarcastic one-liners and sasses back to his parents. But that can make it difficult for readers — and, frankly, the strip itself — to get a real firm handle on how old Marvin, the character, is supposed to be, from a developmental standpoint. I mean, here, why would you do whole strip where a mom admonishes her kid about wetting the bed, and yet also makes it clear that said kid is wearing diapers, and thus isn’t potty trained yet? It doesn’t add u– wait, what’s that you say? It’s some sick fetish? A fetish where increasingly elaborate piss scenarios are lovingly described to non-consenting newspaper readers everywhere? And it’s been happening in plain view of everyone, for years. Interesting. Interesting. I’ll keep that one in mind next time I read this strip! 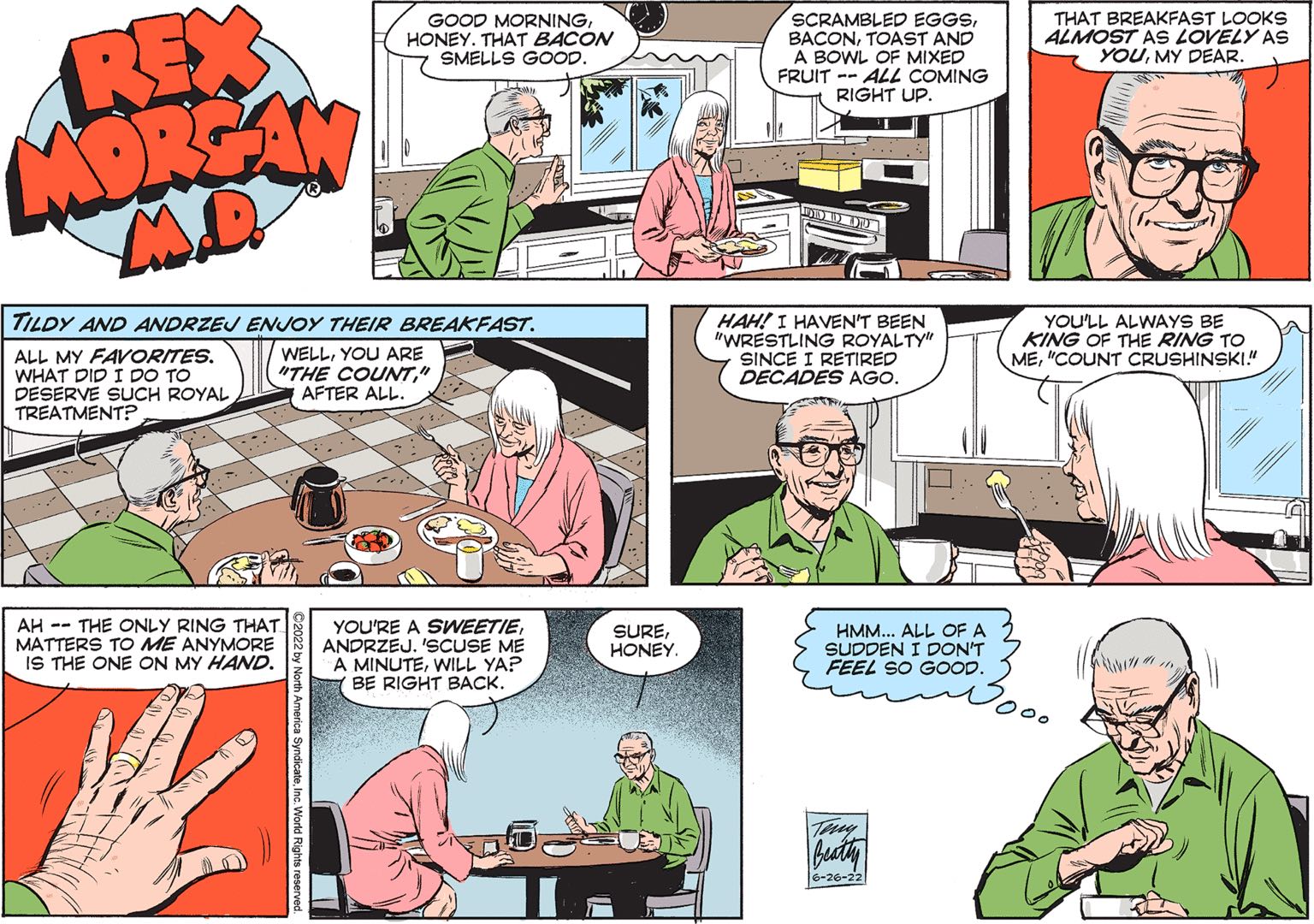 Hey, folks, remember June’s beloved Aunt (?) Hildy, who showed up on the family doorstep one day and became a live-in babysitter, and we briefly thought she might be a drunk but then it turned out she just took your occasional unplanned nap, and finally Rex reconnected her with her cheating ex-husband Andrzej, who was also an ex-pro wrestler, and they made up and got back together, sexually, and then she moved out? Anyway, the Street Sweeper plot has finally wrapped up, so I guess the new storyline is going to be to find what Hildy and Andrzej are up to. What they appear to be up to is dying of heart disease, so this should be a quick one.

Well, this is it, everyone: consensual nonmonogamy has finally hit the newspaper comics. Sure, it’s a radical comic like Rhymes With Orange today, but can the normal ones like Garfield be far behind?