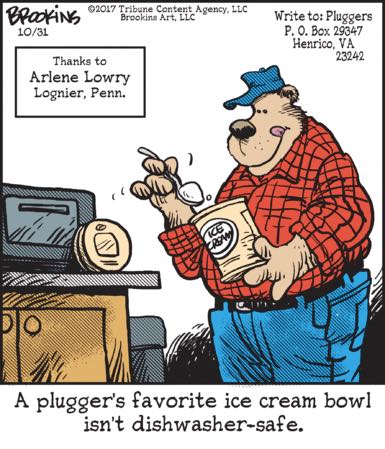 Today’s Pluggers is another look into the sad world of the young plugger bear-man. I’m not saying he’s sad so much because he’s eating ice cream out of its container — who amongst us hasn’t done the same? — so much as because of the location where he’s chosen to do so. This is a man(imal) whose car routinely serves as his dining room and who “cuts out the middleman” by just straight-up letting food scraps from his poorly constructed sandwiches accumulate in the sink, so I suppose part of the point is that he’s not held back by society’s rules about where one should feed, but still, something about the way he’s carefully leaned the lid to the ice cream against the … bread box? toaster oven? Whatever, it’s just some random and probably largely unused piece of kitchen equipment that our bear-man hero mostly employs to hold up the disposable packaging of whatever it is he’s consuming whole while standing in the middle of the kitchen floor, alone.

The current weekly Phantom plot involves a journey to Walker’s Table, a mesa in the American Southwest that at some point came under the control of our Africa-based hero-lineage, where the Ghost-Who-Doesn’t-Check-In-With-His-Far-Flung-Real-Estate-Holdings tried to land a plane last week only to be driven off by gunfire. I’m mostly just amused by this long list of social malcontents who may or may not be lurking up there. If the ideological base of the occupying force really is so diverse, the smart bet would probably just be to leave them holed up there until they turn on each other and see who comes out on top. And don’t count out the Trekkies, man! The whole thing where they have to pay $10 a month for the new CBS streaming app in order to watch Discovery has ’em pissed.

Ha ha! It’s funny because this guy has married a number of women, and he wants to give them all a book about a husband who watches his wife die of cancer, as a “gift”!