For those of you who aren’t fully “in the know” on the details of beloved syndicated soap-opera strip Mary Worth, “Santa Royale,” Mary’s home and the setting for most of the action, is a thinly veiled version of the California university/beach town of Santa Barbara — they even use the real names for neighboring places, like Goleta. Anyway, you’ve probably heard about the horrific mudslides in Montecito last week, but you might not know that Montecito too is part of the Santa Barbara area — is right next door, in fact. What I’m trying to say is that while I wouldn’t wish that sort of disaster on anyone in real life, it would be pretty funny in Wilbur, out for a brisk, optimistic walk after deciding to pretend that he has his life together emotionally, were suddenly swept out to sea by a wall of mud. 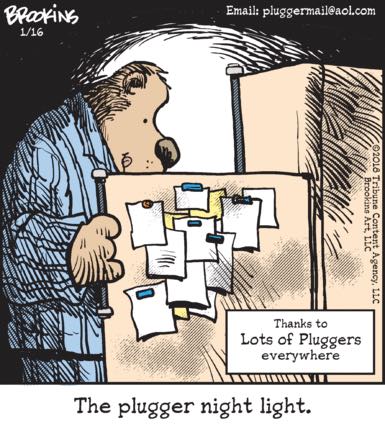 Pluggers aren’t afraid of the dark … but they are afraid of that yawning hole inside of them, the one that they can never fill with food no matter how much they try.

The excuses Sarge has to come up with for all the times he physically abuses the soldiers under his command are becoming increasingly transparent.