So, just to remind you of the ongoing antics in the Dick Tracy Moon Maid plot: Glenna Ermine, daughter of flower-themed gangster Posie Ermine, was surgically and psychologically altered so that she looks like, and for a while believed herself to be, the deceased Moon Maid, daughter of the Governor of the Moon and Dick Tracy’s daughter-in-law, and now Ermine and the Governor (side note: who’s governing the moon in the Governor’s absence? Is there a Lieutenant-Governor of the Moon???) have broken into Diet Smith’s heavily guarded compound where Glenna, who now understands her origins and refers to herself as Mysta Chimera, lives. Anyway, if you thought that being held incommunicado in a research facility run by a defense contractor was a bad deal or something, today’s strip should disabuse you of that notion, since you can see that Mysta is free to relax and grill some burgers outside in the freezing Neo-Chicago winter anytime she wants!

Ahh, you know the old saying, “History is written by the winners, and then taught to the children by people who come across as ‘nice,’ but the children can’t help but sense the elided stories of the conquered and exterminated that lie beneath the sunny tales of victory, and so they and their adult friends who maybe they spend more time with than is healthy end up staring blankly out across the snowy landscape, unable to express the gnawing feeling of absence that underlies everything they know.”

Looks like Doctor Connors should’ve had one more bottle in his box o’ potential-arm-regrowing potions: a bottle of Hulk blood! All’s well that ends well, unless his new arm gets angry for some reason. 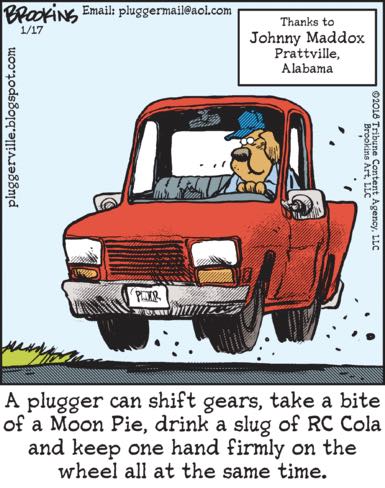 Plugger multitasking: a plugger can simultaneously operate a manual-shift truck that would baffle an elitist city-dweller, exacerbate his incipient diabetes, and promote his favorite #brands.