I was struck by the first panel of today’s Snuffy Smith, as the strip generally doesn’t do much by way of experimenting with form but today gives us a different perspective of our diminutive title character, just barely visible from the judge’s bench. Perhaps it’s meant to be symbolic of today’s installment’s narrative: normally we see things from the viewpoint of Snuffy Smith, to the extent that we find his layabout criminal attitudes normal and even charming. But the mention of Farmer Clem reminds us that there are in fact honest citizens trying to extract sustenance from Hootin’ Holler’s meager soil, their lives made all the harder by Snuffy’s thievery. And then there are the chickens. My god, think of the horrors the chickens have to suffer! (I’m talking about being killed and eaten, of course. You thought I was talking about weird sex stuff, didn’t you? What, being killed and eaten isn’t bad enough?)

This is an intensely weird setup to this joke, right? The definite vibe I’m getting here is that the “new friend” is going to follow the trail of detritus to Chip’s lair, where he will have to defeat him in combat and either win glory or be devoured.

This seems like an adequate penance for Marty, but I see a big loophole: he’s going to take that ad time he’s forced to buy during the girls’ game and fill it with his own stream-of-consciousness take on what he got from reading the “Latin America: A Land Of Contrasts” ebook while drunk.

Oh, I guess Wilbur is only getting dumped from his local paper, so his livelihood won’t be destroyed; it’s just that his ex won’t be reminded of what she gave up every time she opens the Santa Royale News-Intelligencer to the op-ed pages, which, I assume, she probably doesn’t do very often, because print media, am I right? I know we did a whole storyline about how Iris is unusually old to be dating Zak, but come on, she’s not that old. Anyway, I certainly hope that, just as Santa Royale is a thinly veiled stand-in Santa Barbara, the Santa Royale Democrat and Telegraph is similarly modelled on the Santa Barbara News-Press, because that paper’s story is nuts. It’s probably the only small-city daily in America to merit not just a Wikipedia article but an entirely separate Wikipedia “controversy” article, and the idea of Wilbur stomping down there to whine about his columns while the staff is in the midst of labor agitation, ideological purges, and child porn investigations is delicious.

“I thought I was going to be paired up with some young guys, some new blood,” Flash Freeman thinks mournfully to himself. “That Wayne and Garth shit is more than 25 years old at this point. This is going to be a disaster.” 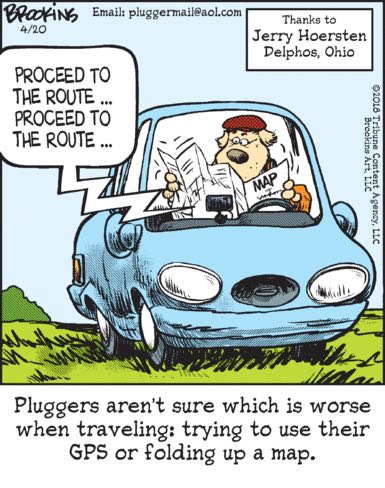 I think I’ve spotted your problem there, sir: your GPS is designed to navigate you from place to place via America’s road system and not, say, across an open field or wherever the hell it is you are.