OK, so all of us [checks comments] some of us [digs deeper into comments and also into Facebook and Twitter replies] I for one have been enjoying this Wilbur humiliation/unearned redemption arc over the past several … weeks? Months? Time has no meaning, here inside Wilbur’s troubled psyche! But anyway, I’m glad things seem to be wrapping up, because, warmly as I feel towards the Weston clan, we’ve been seeing an awful lot of Wilbur and Dawn lately. Mary Worth has traditionally been about the random one-off nobodies who get their lives meddled and then promptly walk off into the narrative sunset, but if we’re not going to do that next time around, let’s at least get into some of the other Charterstone regulars. Like Toby and Ian! God, I love Toby and Ian, and we haven’t had a good Ian story since that time Toby almost left him, so I’m really looking forward to him being eased back into the strip in a context where he’ll almost certainly say something really cutting and demeaning to Wilbur at a dinner where the ostensible goal is to cheer him up. The “promise” Mary is about to extract from Wilbur is that he wear tear-away clothes so that at the first sign of conflict he and Ian can settle matters in the greco-roman wrestling pit she’s conveniently set up in Charterstone’s rec room.

Heather is of course merely a nanny, and isn’t capable of running an aerospace company like Avery International. But if there’s some disaster — well, that’s when you need to turn to a nanny to run your aerospace company, obviously! A good example of a disaster would be if someone were to try to sell the company to a high-tech Indian firm, boosting shareholder value in the process. You’d definitely want to call in a nanny to prevent that sort of thing from happening.

Marvin has spent the week doing an incredibly unfunny series of jokes about Amazon’s Alexa virtual assistant, which for some reason they’ve decided to refer to as “Alfafa” … because of the popular Little Rascal, I guess? The Little Rascals, the incredibly current cultural reference that’s always at the top of everyone’s minds? Anyway, that’s just the an unfunny structure providing the base for the unfunny jokes, and you really have to keep reminding yourself as you read that at least they aren’t making unfunny jokes about shitting. 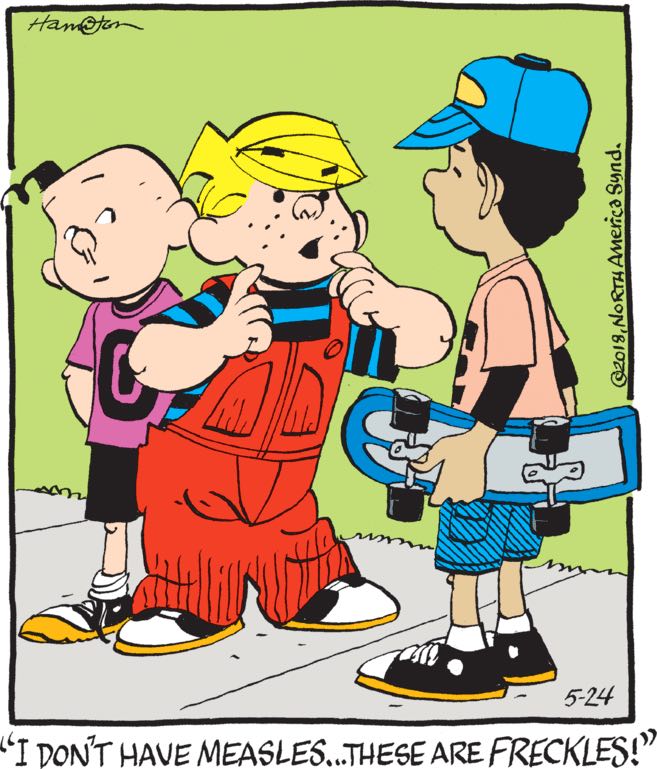 Dennis definitely has measles, an alarming number of his schoolmates are vulnerable thanks to anti-vaccination hysteria, and this is clearly his most menacing move yet.