I am living for the disappointed looks on the faces of Hi and Other Friend Of Thirsty And Possibly Hi in panel two here! While both of these gentlemen wouldn’t have dreamed of trying to horn in on their wives’ bonding time with their female friends, they had always been jealous of their book clubs, and when they got Thirsty’s unexpected invite, they were thrilled: an intellectual salon, a meeting of the minds that would deepen their male bonds! But no, it’s just another opportunity to do low-level crimes, and lose money to boot. Maybe the two of them should start their own book club. It’s not too late, fellas! Overcome that masculine reserve and live your literary dreams!

Some of you have wondered: in these difficult times for journalism, how can Woods and Wildlife Magazine possibly keep up its expensive longform niche journalism, paying for long trips overseas for its writers (along with their outrageous travel insurance premiums) and still making rent on its posh Manhattan offices even as advertising rates plummet? Well, the answer is that while Americans may be spending their days endlessly noodling around on social media, consumers in the Latin American market still hunger for fascinating stories about our natural world (World War I era airplanes count as part of the natural world if they fall into a sinkhole). 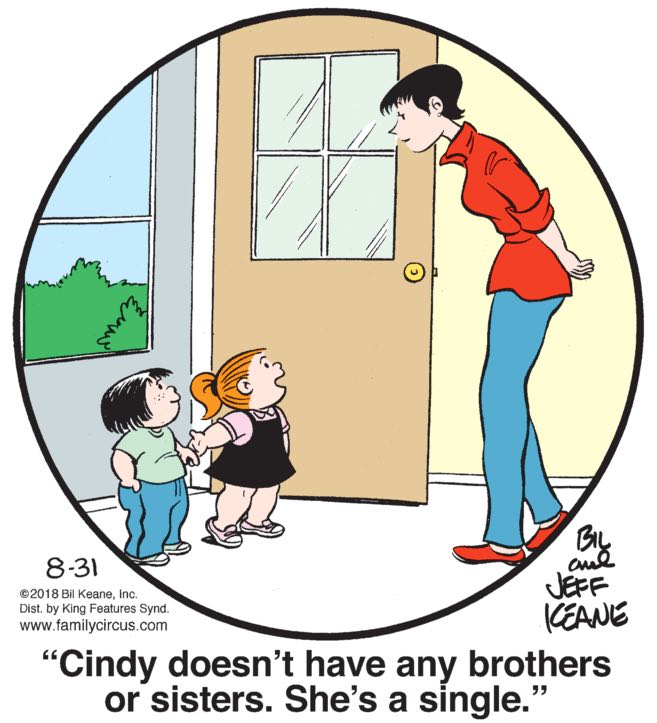 Finally, I’ve acknowledged to myself that making a joke about the Keane Kids as part of a horrifying, incestous planned breeding program to create some kind of genetically pure “holy race” is both distasteful and also doesn’t have much support in the comic itself. Now to take a big sip of coffee and read today’s Family Circus!

Ha ha, if an absolutely furious old man is screaming abuse at people in the form of unfunny wordplay, it must be Funky Winkerbean!