Oh my god, it’s even better than I could’ve hoped: Mary is going to force emotional progress on Mr. Wynter by driving him to the pet shelter and browbeating him into adopting a pet while he begs her to stop! This is of course a terrible way to deal with a man’s sadness over a lost dog, simultaneously rushing the grieving process and belittling the specific bond he felt with his unique beloved pup. Honestly, though, my take is: why stop here? Why not just take things to their logical conclusion? Remember Saul’s devastation over the the loss of the love of his life? Why doesn’t Mary just drag him down to some adult education class that skews female — quilting? — and say “Maybe we can also cheer up a lonely widow or divorceé and make their day!” Saul will cling desperately to the side of the car, but with her persistence and surprising upper body strength, Mary will ensure that Saul loves again, whether he wants to or not.

A lot of people have been begging in the comments for me to check in on the Mark Trail storyline, which they’ve claimed is “exciting,” which, are you kidding me, it’s consisted entirely of Rusty and Mara having a weird, awkward conversation with “Backpack Guy” about which parts of this small Mexican town aren’t safe for two American tourist kids, one of whom is an obvious moron. However, I do of course need to present today’s strip to you, since it features the triumphant return of Extremely Cool Motorcycle Dude, who definitely seems to be from a different faction from Backpack Guy. Which of these two artifact-stealing-adjacent groups has Rusty and Mara’s best interests at heart? Is it neither of them? Can it please be neither of them? That’d be great.

This Dick Tracy storyline has been remarkably short and low on character motivation — just a couple weeks after we’ve been introduced to Pauly and suddenly he’s a guy who’s always wanted to kill Dick Tracy, blah blah blah, now he and Dick are firing pistols at each other at close range and making no attempt to dive for cover or anything, etc., etc. Mostly I want to point out that Pauly looks like you put Dick and Sam together in the transporter pod from The Fly and turned the Color Palette knob all the way to “brown.” 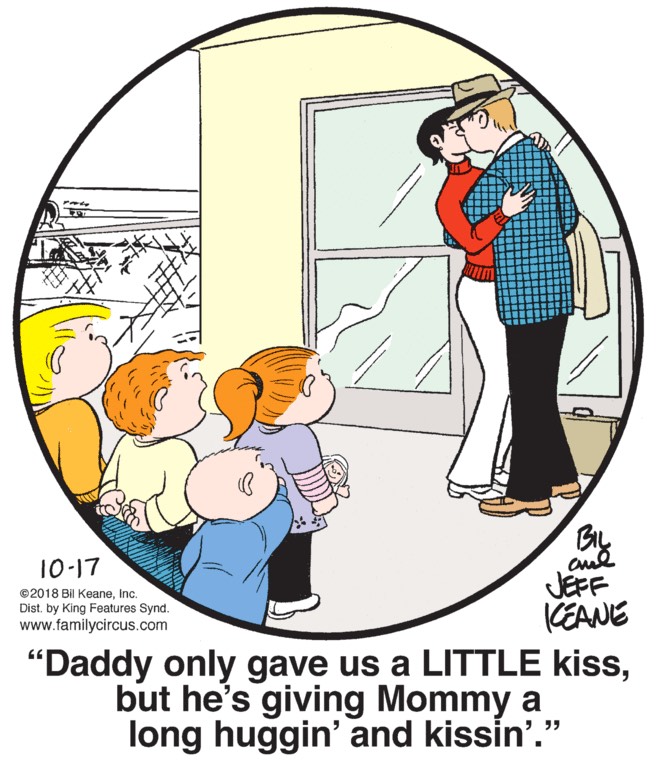