As foretold in prophecy, Unity Day 2018 is finally here! How are our most important cultural commenters, newspaper comic strips, dealing with the scourge of bullying? Honestly, not great!

Speaking as someone who was a tremendous nerd as a child and also someone who loves etymology, I can assure you that there are few things more likely to earn a swift punch in the mouth than attempting to parry bullying by delving into some word origins. Also if you’re wondering how exactly bully came to change meanings in this way, it turns out that “a connecting sense between ‘lover’ and ‘ruffian’ might be ‘protector of a prostitute,’ which was one sense of bully (though it is not specifically attested until 1706).” So if our young victim here wanted to show off her bookish nature but avoid violent retribution, she might want to point out that by calling her tormenter a bully she’s also calling him a pimp, though this might not have the sting that she originally intended to deliver via etymological factoids and might instead just puff up the lad’s self-image.

Anyway, we all know there’s only one kind of knowledge that bullies respect: knowledge about how to impose your will on others with violence. 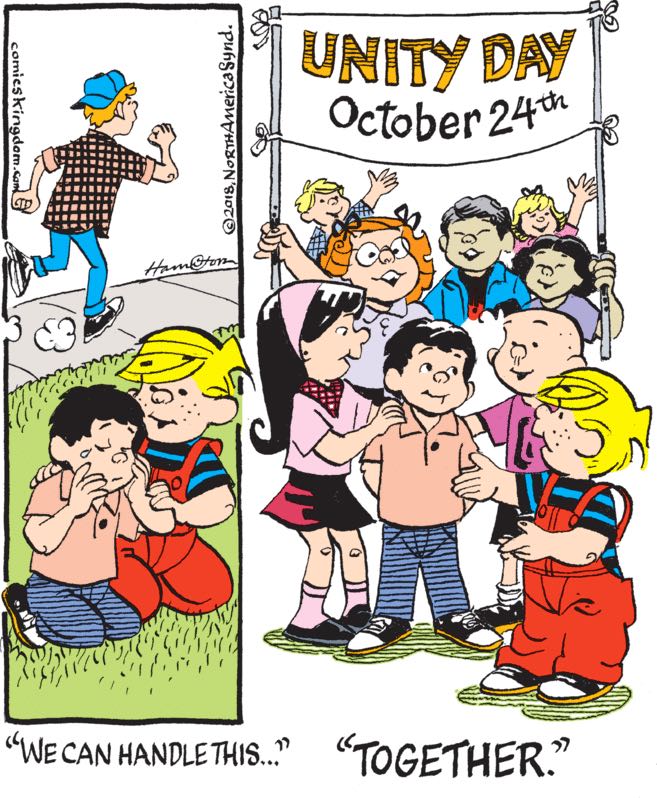 Speaking of which, what’s the “Unity” of “Unity Day” stand for, anyway? Well, as today’s Dennis the Menace demonstrates, it means that smaller, weaker children should “unify” with one another and face down their lone larger tormenter, uniting into an angry mob that can tear their bullies limb from limb in an act of horrific orgiastic revenge.

Mary Worth, meanwhile, cuts through the feel-good bullshit to get at the real truth. You see, the whole point of this storyline is that if you bully a sad old man grieving his dead dog long enough, he’ll eventually relent and adopt another dog. And isn’t that a good thing? Why are you against bullying? Do you want sad, abused dogs to languish in shelters, forever?