I guess it looks like Merlin is joining the cast of Hagar the Horrible regulars, even though strictly speaking he’s a figure from 6th century Britain and not 10th century Norway. Still, this strip fits in well with the overall Hagar the Horrible milieu: in an era of widespread illiteracy, Eddie’s ability to scratch out a few runes makes him seem almost magical to his fellow Vikings. 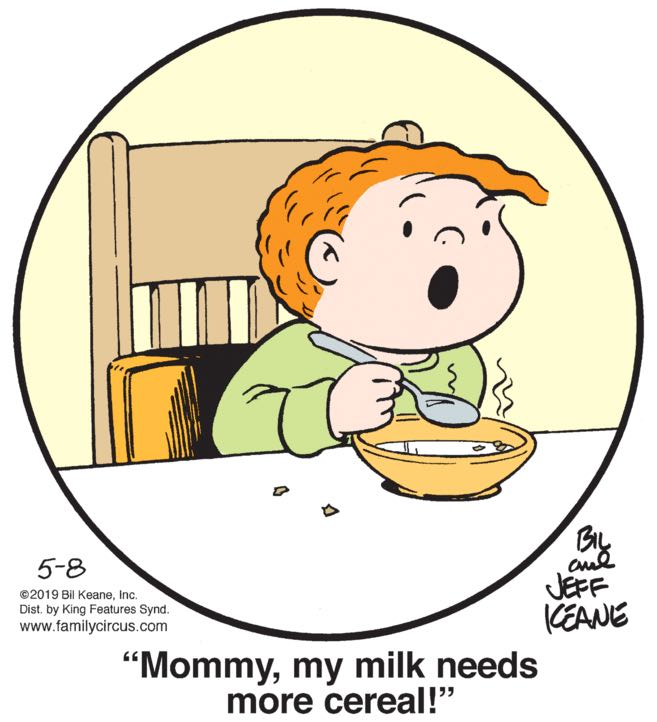 Are those … stink lines coming out of Jeffy’s bowl? Has feeding time in the Kean Kompound devolved so far into chaos that the kids are getting spoiled milk in their breakfast cereal? My god, just think of the farting. The farting. What a nightmare!

Doc may be an addled old man who believes in magic gold mines, but you gotta give him this: when he hears what might be a swarm of bees, or maybe an armed Predator drone, he doesn’t stand around like a sitting duck loudly saying stuff like “Hey, everyone, listen to the sound! Do you hear the sound?” or “The sound is a buzzing sound” or “Yeah, what is that sound, the buzzing sound we’re all talking about?” He just throws on his backpack and gets the hell out of there.