So many Shoe punchlines are met by goggle eyes of horror, and honestly there’s plenty of justification for that, but I really like the expression Roz is wearing here, which is sort of a grim, sly smile. “That’s right,” she’s thinking. “Marci went to Las Vegas with her man and they totally had sex. Procreative sex.”

In a development somehow even more baffling than the weeks and weeks and weeks Gasoline Alley spent on scrapbooking, Gasoline Alley has decided to spend God knows how many weeks discussing the very real and fascinating condition of synesthesia by focusing on a new character, a physician’s assistant who claims his synesthesia allows him to feel his patients’ ailments, which isn’t even close to being a real thing. Still, if it’s an avenue for this strip to get into some “the HUMAN MIND is the ultimate trip, baby” visual territory like it is today, I’m willing to forgive a lot.

“Kathmandu isn’t the primitive, out-of-date city the world thinks it is! Is it still a little naive? Possibly. Has the mayor been convinced to pay a substantial portion of the annual budget to promote the city’s modernity in what he’s been assured is a widely read and universally beloved American comic strip? Well, yes. But ‘primitive’? Definitely not!” 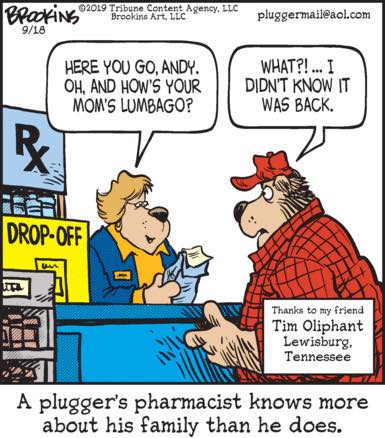 The primary facts you need to know about a plugger’s family members in order to keep abreast of their lives are the various ways in which their aged and ill-treated bodies are falling apart.