Hey, remember back in April, when Marie quit her job as the Spencer-Driver compound’s primary servant so she could go to grad school? Well, turns out grad school’s expensive, so it looks like she will once again be taking on a job as a Spencer-Driver compound servant, only this time to “work part-time at” the ill-advised B&B Abbey launched in a fit of aimless mania, and by “work part-time at” we mean “do 100% of the management of as Abbey immediately stops paying attention to it once Marie shows up to bail her out.” Fortunately, Abbey is so far removed from the little people and their financial concerns that Marie will be able to write a truly staggering number of zeroes on that post-it note, safe in the knowledge that the Spencer-Driver money guy will just sigh heavily and sell a certain percentage of the family’s krugerrand reserves after Abbey hands it to him without ever having looked at it. 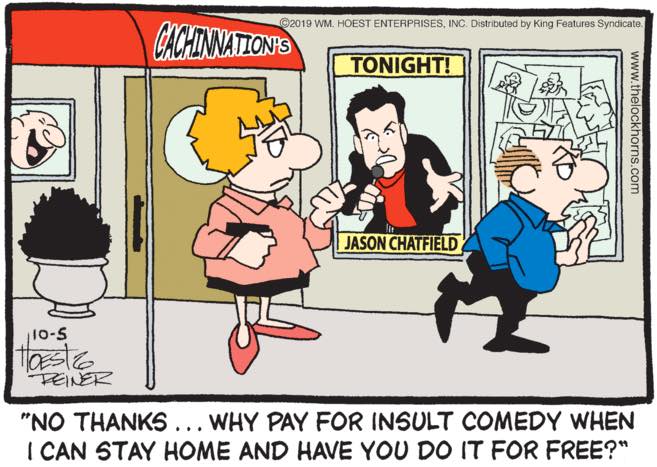 The Lockhorns is not a strip known for its verisimilitude, but it is absolutely true that every single comedy club has a name that sounds like someone was held at gunpoint and forced to come up with twenty “funny” nonsense names for comedy clubs, and then they used the twentieth one the poor victim came up with, the one that came only after five minutes of them crying and begging to be allowed to see their family again someday. So, yeah, I absolutely believe that the place Loretta would try to drag Leroy into in an attempt to be able to spend time with him without talking and maybe have him get made fun of by touring comic who’s not at all happy to be there would be called “Cachinnation’s,” and I find the font believable as well. 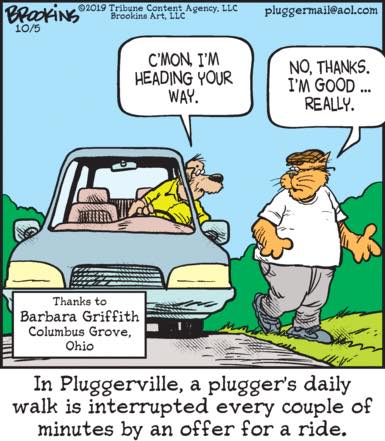 Pluggers have long centered their identity around living in exurban communities that are so completely built around the automobile that pedestrians are considered cultural aberrations, but it’s honestly surprising to me that they’re being so up front about it.

So … it looks like Mary Worth has chosen, over the next several weeks, to show us, in a very deliberately paced series of strips, Wilbur and Estelle having sex? I guess … I guess we deserve this, for something we did, somewhere along the line.