I was going to say that Dagwood, who is apparently willing to stick his tongue into some sort of measuring/scanning apparatus and have the details of his mouth biology stored indefinitely in the cloud in order to prove his “loyalty” to a restaurant and get few percent knocked off his bill, represents the ultimate version of the modern human, willing to trade away his privacy for pennies. But then it occurred to me that restaurants could just do this with facial recognition, which makes me assume that this is actually just some kind of sick fetish idea on Dagwood’s part.

I fully expect that I’m going to be bringing you my close analysis of Wilbur’s Drunken Double Date multiple times this week. Today, as we learn that Zak does not subscribe to the cult of the grind prevalent among so many tech founders and game industry execs, we should pause and appreciate Wilbur’s facial expression in panel two, which is a pretty good illustration of a very, very drunk guy trying and almost succeeding in holding it together.

One of the core bits of Dustin lore that I already hate myself for knowing is that Dustin is a temp who gets assigned to generic white-collar office jobs from which he almost immediately gets fired because he sucks at them, but somehow his temp agency keeps finding him more work. Anyway, it’s definitely out of character for him to suddenly be given a job in the skilled trades, and I’d like to believe that it represents some narrative shift in the strip, but I’m assuming the cartoonist saw the phrase “Quick Lube” and thought, “Ha ha, you know who wouldn’t be quick at lubing things? That incompetent millennial Dustin!” We should probably be glad the strip ended up like this and not about sex stuff. 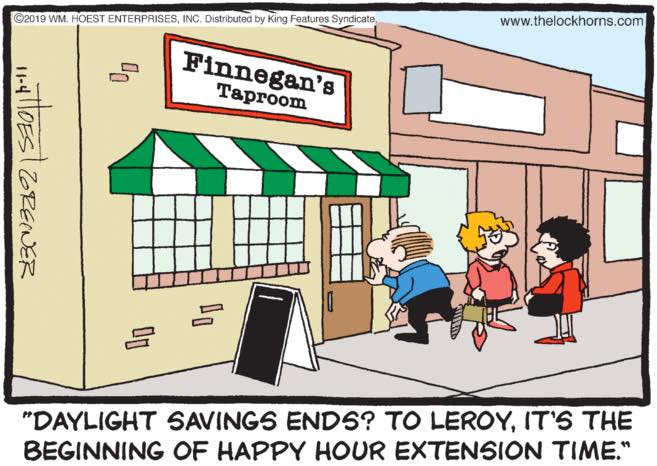 My favorite thing about this strip is that Leroy has turned away from his wife and is heading into the bar while she narrates her disdain for him to some passerby. “Wife making mouth noises, but no time to process them,” he thinks. “Daylight waning, along with it opportunities for day drinking.”