So this week I’ve decided to add some new strips to my rotation, and one of them is Daddy Daze, billed by King Features as being about “Paul, the single dad who amicably shares custody of little Angus with ex-wife Amy, as he juggles an at-home job and domestic duties.” Admittedly I’ve only been reading it for a week or so, but it seems to be more about “Paul, a single dad imprisoned in some featureless void with only a preverbal infant for company, eventually driven to madness by his loneliness and inventing increasingly deranged and nightmarish imagery out of his son’s babbling.” It’s real grim stuff.

So one of the ongoing Judge Parker plots is that Sophie, still suffering PTSD after her kidnapping, is, much to Abbey’s consternation, hesitant to apply to college because really, why bother, why should we act like any of us have a future, anyway? But it seems she’s now discovered a way to add meaning in her life at least in the short term, by helping her family friend and actual criminal Judge Parker Emeritus get elected mayor. Sophie’s political views are somewhat eclectic, ranging from “climate change is bad” to “any self-respecting polity ought to have a fleet of secret flying death robots to wreak havoc on its enemies,” so she should do great with Future Mayor Parker’s campaign, which mostly seems based on the idea that “Uh hey guys I went to jail for a while and it turns out jail sucks.” 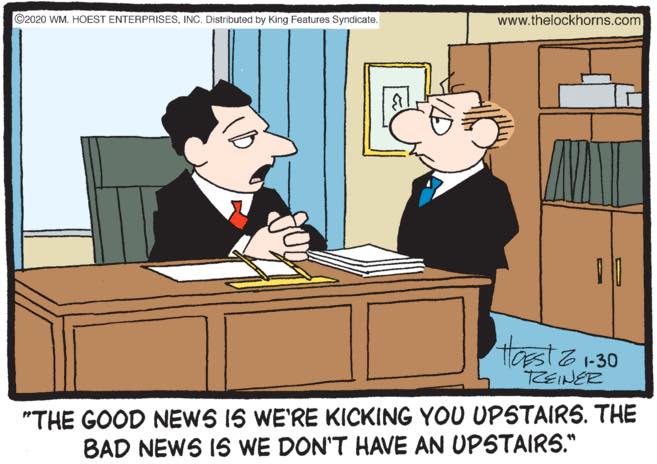 Have I ever liked Leroy Lockhorn? No, of course not. He is, inherently, not a likable character. But do I want to see him hurled to his death off the roof of whatever depressing suburban office building he works in? No. That’s too much. It’s too much!