Those of us fated by the gods to read Funky Winkerbean daily just have to accept the fact that there was a brief window at the very beginning of the strip’s history when it was actually fun and wacky, and understand that character names like “Funky Winkerbean,” “Bull Bushka” (RIP), and “Les Moore” are relics from that earlier, zanier time, even though now we have to somehow deal with sentences like “Funky Winkerbean is slowly dying of prostate cancer” or “Bull Bushka had CTE and committed suicide by driving off a cliff.” But if you’re going to do grim-ass plots like “Adeela is going to be deported due to a bureaucratic mixup,” for the love of Christ do not introduce a brand new character with an on-the-nose punny name like “Amicus Breef.” Get it, because he’s a lawyer! Ha ha! 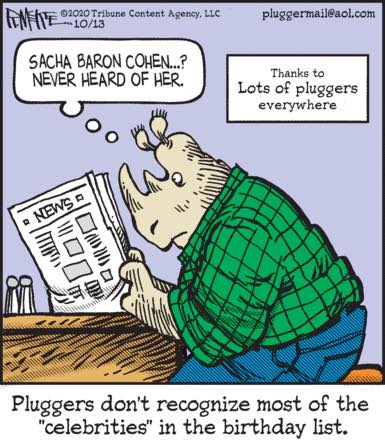 I’m sorry this plugger subscribes to a sad newspaper that can’t even afford wire service stock photos of celebs for its celebrity birthday list, but I also sincerely believe that lots of pluggers everywhere are the last ones left making Borat voice “MY WIFE” jokes.