So the big Gil Thorp fall plot is this: not only are two young gentlemen competing for the starting quarterback job, but they’re also vying for the affections of sassy newcomer Corina Karenna. One of the lads (I haven’t bothered learning their names and I’m not planning on doing so any time soon) has figured out that the best way to a girl’s heart is to recognize that she exists as an autonomous human with interests of her own outside himself, and is coming to watch her play volleyball, which is nice, and he’s bringing half the football team with him. These guys don’t know jack about volleyball, obviously, unlike volleyball superfan Dallas, who I’d like to imagine had the bleachers to himself every game before this. I also don’t know jack about volleyball, so I’d also like to imagine that “libero” is an entirely made-up term and Dallas is just fucking with these meatheads.

Aww, looks like it’s the dark night of the soul for our star-crossed lovers! Tommy is singing “The Sound of Silence” in his mind right now, because he was belting it out earlier before Mary knocked on the door to say that “Simon and Garfunkel seem like nice young men but it’s after eight o’cock, dear.”

Is … is Dick Tracy really the guy you want on this? Is he going to arrest a gas leak? Or, more likely, shoot a gas leak while it’s “trying to escape”? 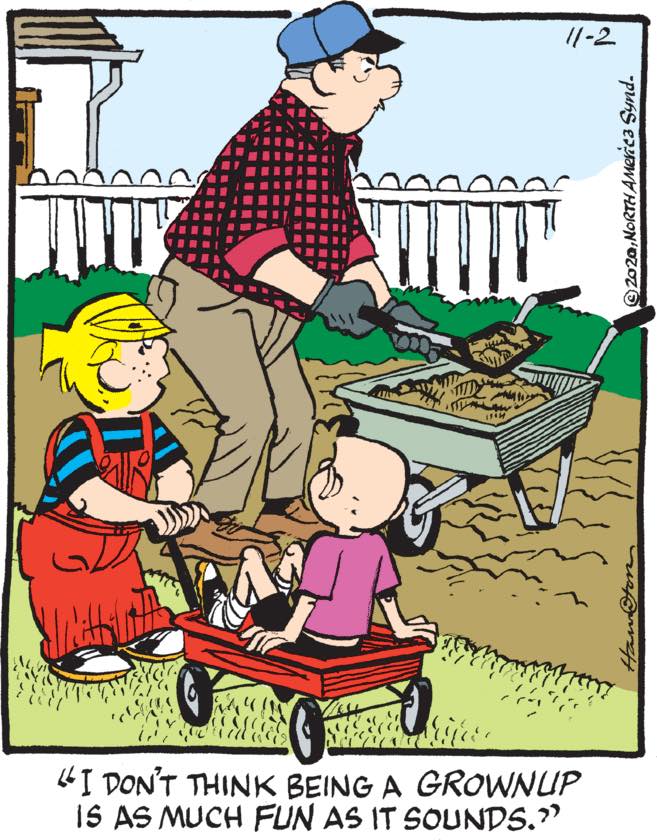 The best thing about this, to me? I think it’s safe to assume that Mr. Wilson is financially comfortable enough to buy all the groceries he needs, so this manual labor he’s doing in his garden bed is for fun, at some level. Dennis is right! Adulthood blows!