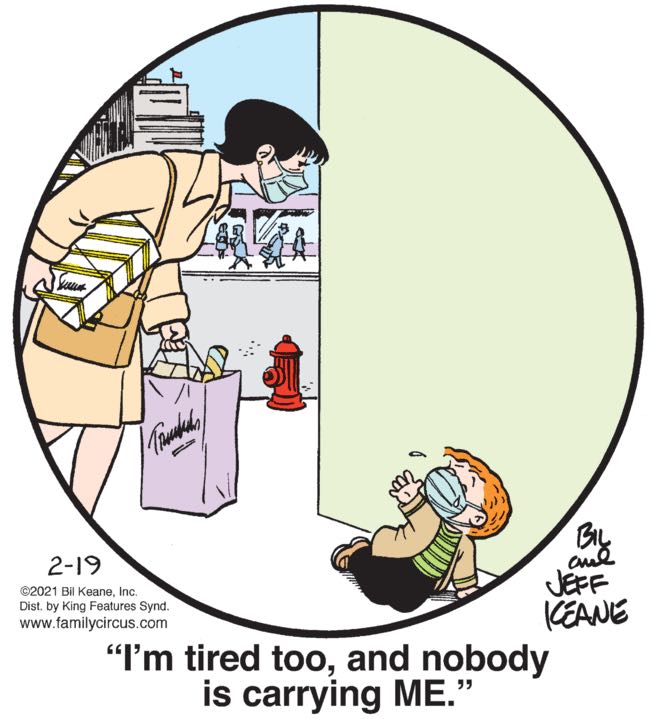 I’m not too proud to admit that I’m extremely terrified of my brain slowly (or perhaps not so slowly) dulling as I age, and so when I’m confronted with something like today’s Family Circus, which like all Family Ciruses seems simple enough but which today I nevertheless cannot quite parse — well, I start to worry. Like, Jeffy’s “too” implies that he’s reacting to something, but what exactly? Ma Keane telling him that she can’t carry him because she’s tired? But the “nobody is carrying ME” part would only make sense if someone was carrying her. Does he want to be carried like the boxes from her shopping trip? Does … does Jeffy think the boxes are tired? Anyway, all that aside, you know I enjoy a good Jeffy meltdown, and I like the composition of the panel, with Jeffy kind of hidden from the hustle and bustle of the street by this wall. Nobody can see him, Thel. You could just start walking away, and then keep walking. Nobody would ever know. Nobody would ever know.

[UPDATE: ah ha yes Thel is the one delivering the line, actually, the puddingification of my brain is proceeding apace]

So after Buck binged on fast food and had to do some mild exercise to fix his blood sugar, and then he got very mildly and passive-aggressively sassed by his nutritionist, he seems to have resigned himself to his fate. And, look, I slag on Buck a lot here, because I consider him unlikeable and irritating, but that said I find his current predicament extremely relatable! I don’t have a great diet and I like greasy fried food in (what I tell myself is) moderation, and so I truly feel the pathos in his facial expression in panel one as he contemplates what might constitute a “tasty diabetic-friendly chicken recipe” and whether a swift death as he rides the high of an insulin spike would be preferable.