OK, so we’ve been having a bit of fun with “The current run of Crankshaft strips were probably written in the early days of the pandemic, with somewhat amusing results.” But I think we can all agree that it’s a little uncanny that, in the year-ago writing strategy sessions, Funkyco decided that by March 2021 necessary post-pandemic fiscal stimulus would be held up by partisan legislative wrangling. Like, it wouldn’t have been impossible to predict, but I’m honestly pretty impressed — impressed enough that I was going to forgive today’s strip for neglecting to actually include a joke, until I remembered that mixing together two common and semantically related turns of phrase counts as a “joke” in Crankshaft.

God, think about how sad it is to have a little kid visualize her dad wearing vaguely old-timey clothes while talking to his boring-ass real-life friends vague acquaintances, and saying that represents her “imagination run[ning] wild.” Guess that head injury was even worse than we thought, huh?

In other news, I’ve figured out what the absolute grossest phrase you can use while flirting is, and it’s “The dogs are chowing down … and now it’s our turn!” 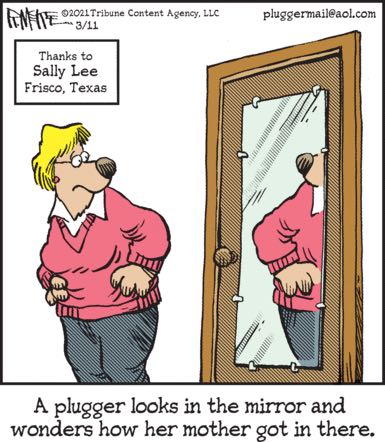 TIRED: Pluggers represent the “forgotten man” (and woman), the ones who keep their heads down and keep this country running despite tough times and the disdain of the elites.

WIRED: Pluggers have mastered the technology to send their enemies to the Phantom Zone. They experimented on their own parents to hone this weapon and will surely show us no mercy!