You don’t read Funky Winkerbean every day as long as I have without becoming a connoisseur of the various textures of suffering its characters endure. Of course, I hate every single Funkyverse inhabitant, so you’d think I’d love each and every kind of pain heaped upon them, but some of them allow the characters to become even more self-righteous, and I’m opposed to that, obviously. But this one? This one I like! Remember when some Hollywood people tried to make an actually watchable version of Lisa’s Story, but Les didn’t like it so he managed to sabotage the production and also get paid for it, but then he agreed to let Mason do it “the right way?” Well, turns out it was the wrong way if you wanted anyone to watch and enjoy it! Ha ha! Get it? Les’s movie’s a flop, and it’s all his fault! Movies usually have quite a long post-production process so it’s actually kind of odd that the wrap party was like six weeks ago and already the movie has landed in theaters with a thud. It’s also kind of odd that Les, who you’d think would be a little more in the loop on how the whole thing is going, just got a phone call from Mason saying “Yeah man, shit sucked, nobody liked it, sorry about that” and that’s how he found out. Almost like Mason didn’t actually bother putting the movie together or finding a distributor and instead left for South America with all his investors’ money! (Just kidding, nobody “invested,” financially or emotionally, in this movie.)

Meanwhile, in the “fun” Funkyverse strip, Pam thinks that only God can transform the basic nature of one of His creations, but Crankshaft seems to be contemplating some kind of genetic engineering project.

Spent what I have to imagine is longer than most people spend contemplating Snuffy Smith contemplating today’s Snuffy Smith and came to the conclusion that this one is good. It’s weird, but good. Less grotesque tongue waggling at backwoods antics and more strips where Snuffy uses the volume of space he takes up as the basis of various gags, please. 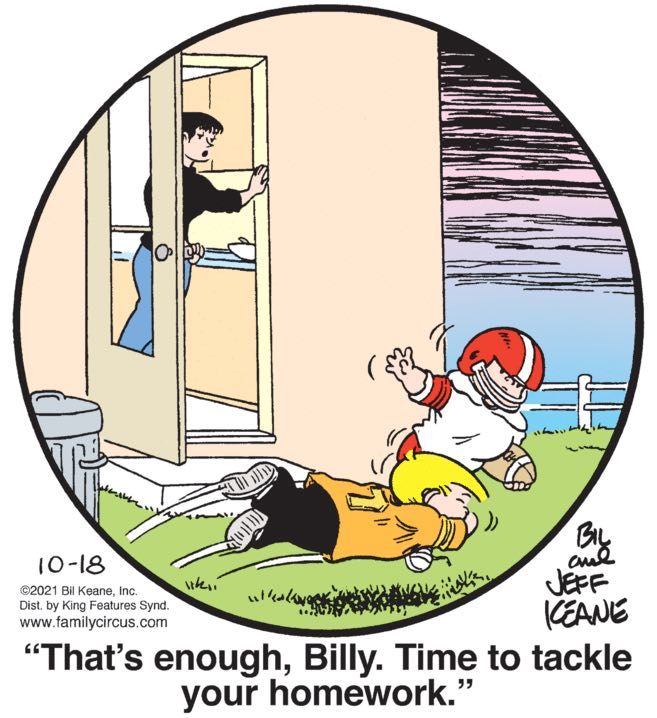 The Keanes have let Billy play tackle football for hours without a helmet in hopes that he’ll concuss himself, but it looks like that’s not going to happen tonight. Maybe they can get him to break his brain by trying to think!